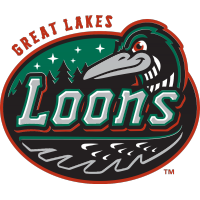 MIDLAND, Mich. – The Great Lakes Loons have won in many different styles this season. On Thursday night, it was an offensive explosion of 13 runs on 19 hits that propelled the Loons to victory.

On Friday night, it was excellent pitching and just enough offense.

Great Lakes (36-25) got its first two runs in the first inning, scoring in the opening frame for the sixth night in a row. Jorbit Vivas reached base in the Loons’ first at-bat for the third game in a row, this time on a walk. Two outs later, Jose Ramos blasted his sixth homer of the High-A season, and his 12th of the year overall.

The Loons, High-A affiliate of the Los Angeles Dodgers, would not need any more run support. Kyle Hurt started the game and was superb, not allowing a hit and walking three batters. The right-hander punched out eight batters, a personal season high. Hurt, the former USC Trojan, now has a 10-inning scoreless streak, and has not allowed a hit in nine straight innings at Dow Diamond.

Wisconsin (34-26) had good work from its starter as well, but Justin Jarvis (L, 5-3) takes a tough luck loss. After the Ramos longball, Jarvis allowed just one more hit, walking three in total and striking out eleven. The Timber Rattlers, High-A affiliate of the Milwaukee Brewers, could not muster a run to support a Jarvis quality start.

After Hurt, los Pepinillos turned to lefty Lael Lockhart (W, 2-0), who picked up right where Hurt left off. Lockhart tossed the final five innings of scoreless baseball, allowing just two hits in the game and one walk while collecting six strikeouts.

Los Pepinillos Picantes del Norte got their final run in the eighth inning. Alex De Jesus led off the frame with a single, then scored on an Eddys Leonard single and error by Wisconsin’s right fielder. That made it a 3-0 Loons lead, the score which would be the final.

The Loons now hold a 3-1 lead in the series, and have secured at least a split in the set with two games to play. With a Dayton loss Friday night, the Loons have gained a game in the standings, now trailing the division-leading Dragons by just 2 1/2 games with six games to play. The team leading the division in each half of the season clinches a playoff spot, and the first half…