Second Half Begins with Statement Win 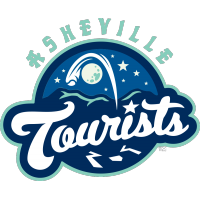 GREENSBORO- The Asheville Tourists made an impressive statement to begin the second half of the season. Asheville handily defeated the Greensboro Grasshoppers 14-4 behind a strong offensive showing and a dominant duo pitching performance from Cole McDonald and Chayce McDermott.

The two pitchers, McDonald and McDermott, combined to pitch all nine innings; the second straight game Asheville has accomplished that feat. McDonald started and lasted four innings. Cole allowed two runs on two hits with six strikeouts. McDermott earned his sixth win of the season by limiting the Grasshoppers to one earned run on one hit over the final five frames.

Chayce has thrown 16 innings against Greensboro this season and has allowed a total of one earned run on three hits with 19 strikeouts.

Offensively, Asheville went to work early. Michael Sandle hit a two-out single in the top of the first and Chad Stevens made the score 2-0 with a Home Run to left field. The Tourists rallied to plate four more runs in the third. Colin Barber and Luis Santana each had RBI singles while Kenedy Corona drove in two with a single.

Stevens collected another RBI in the fourth and Jose Alvarez blasted a three-run Home Run in the seventh. Corona and Santana each drove in a run in the eighth. Quincy Hamilton and Luis Guerrero both reached base three times in the win. The Grasshoppers were held to three hits in the game.

The Tourists will attempt to clinch the series and match their longest road win streak of the season with a win on Saturday night. The first pitch is scheduled for 6:30pm ET.