Skirrow Shines in Loss to Hartford 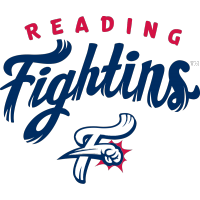 The Reading Fightin Phils fought back to tie Tuesday’s contest after falling behind early. They couldn’t pull ahead in the end and fell to the Hartford Yard Goats (Rockies) 4-2.

Logan O’Hoppe had two hits, two walks and a run scored. Wendell Rijo smacked a double for an RBI and also scored a run.

Hartford struck first with a solo home run from Michael Toglia in the top of the second inning.

The R-Phils had a base runner in each of the first four innings but couldn’t push a run across the plate. One of those base runners was Carlos De La Cruz, who tallied his first Double-A hit with an infield single in the bottom of the fourth.

The Yard Goats made the score 2-0 in the following frame. With one out and the bases loaded, Niko Decolati grounded into a force out but out ran the throw to first base and another run scored.

O’Hoppe led off the bottom of the sixth with a single. He hustled home to score Reading’s first run on Rijo’s triple. Aldrem Corredor plated Rijo on a sacrifice fly to tie the game at two apiece.

A solo shot from Christopher Navarro gave Hartford a 3-2 lead in the top of the seventh.

In the eighth, the Yard Goats tacked on another run thanks to an RBI single from Isaac Collins.

Noah Skirrow got the start on the mound. He went six quality innings, giving up two runs on two hits while striking out four.

Trevor Bettencourt pitched the seventh inning and allowed one run on four hits. He took the loss in Tuesday’s contest.

Adam Leverett came in for the eighth. He gave up one run and one hit while striking out two.

Matt Seelinger tossed a clean ninth frame and struck out one.