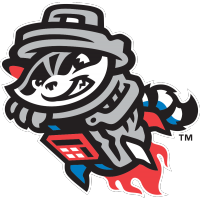 KODAK, Tennessee – The Rocket City Trash Pandas used a patient approach at the plate to take the lead then got strong relief pitching at the end to defeat the Tennessee Smokies 5-4, extending their winning streak to six games on Wednesday night at Smokies Stadium in the second game of their six-game series.

The six-game winning streak is the Trash Pandas second-longest of the season after an eight-game streak from July 1-9 and improves their record to 20 games over .500 at 68-48, tying the mark they set with a 50-30 record, also on July 9.

The Trash Pandas wasted no time in opening the scoring. On the second pitch of the game, Aaron Whitefield laced a double down the left field line against Tennessee starter Riley Thompson. Livan Soto followed by crushing Thompson’s next pitch 387 feet over the wall in right field for a two-run homer, his fifth of the season for an early Rocket City advantage.

Over the next two innings, the Smokies responded to tie it off Rocket City righty Braden Olthoff with Bryce Ball’s RBI double in the first and Zach Davis’ two-out RBI single in the second. That would be all that Olthoff allowed. He kept the score tied with a one, two, three bottom of the third and worked around a one out walk in the fourth to finish his outing. Over four innings, he allowed two runs on five hits in a no-decision.

In the fifth, the Trash Pandas restored the lead with a patient approach at the plate. Aaron Whitefield started the rally with a walk, Soto reached on a soft infield single, and Zach Neto walked to load the bases. Sonny DiChiara then took a four pitch walk of his own, plating Whitefield to put the Trash Pandas up 3-2.

Brett Kerry entered out of the Trash Pandas bullpen in the fifth and was sharp for two scoreless innings, working around a pair of baserunners in the sixth to hold the one-run lead.

In the seventh, Jordyn Adams led off with a double and Whitefield hit an infield single to short, putting two on with nobody out. A double steal advanced the runners to second and third. Neto’s sacrifice fly to center plated Adams and Whitefield came home on a wild pitch from Smokies reliever Hunter Bigge, giving the Trash Pandas their biggest lead of the night at 5-2.

Luke Murphy held the lead with two strikeouts in a scoreless bottom of the seventh. The Smokies got closer in the eighth with two runs against Kolton Ingram before the lefty struck out Cole Roederer…