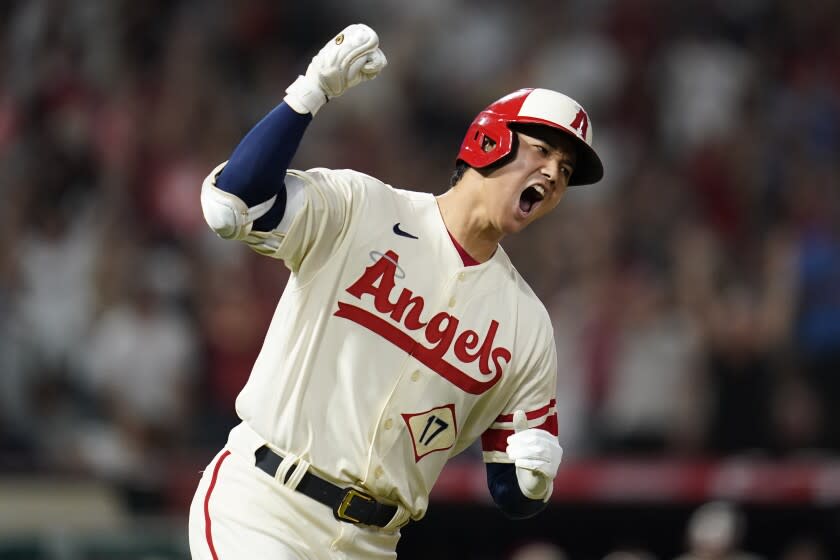 Shohei Ohtani and Aaron Judge got lost in the pitching duel between Angels starter Patrick Sandoval and New York Yankees ace Gerrit Cole. Through their first two at-bats, Ohtani and Judge were hitless. Judge struck out twice, and Ohtani hit a flyout and a popout.

Then in the sixth inning, Ohtani declared himself the most valuable player.

With two on and one out and the Angels trailing by two runs, the baseball titan sized up Cole’s 2-and-0 four-seam fastball and hit it 107 miles per hour into the hedges behind the center-field wall. Ohtani trotted around the bases, and David Fletcher, who reached on a single, and Mike Trout, who reached base on a fielding error, waited to greet him after he touched home plate.

“Just missed it on my first at-bat, so I wanted that next opportunity,” Ohtani said in Japanese through interpreter Ippei Mizuhara after the game. “Luckily Trout got on with the error and gave me that opportunity and I was happy to be able to come through.”

His homer was a no-doubter when it left his bat and fueled the Angels’ 3-2 comeback win. Cole didn’t need to turn around to know where Ohtani was sending his pitch. Cole lightly slapped his glove in response to his mistake. And Yankee center fielder Aaron Hicks could only stand and watch as the ball disappeared behind the wall.

Ohtani is the only player in MLB history to have a 100-strikeout (on the mound) and 30-home run season, which he did in 2021 and was unanimously awarded the American League most valuable player. After hitting his 30th home run during Wednesday’s win, he now has done it twice — Ohtani has 176 strikeouts this season. Ohtani also is the first MLB player to have a season with 10 wins and 30 home runs.

“Simply, I’m honored, happy, humbled to hear that,” Ohtani said of his achievement. “I just want to stay healthy, not get hurt, finish strong.”

Asked of his thoughts on the MVP race with Judge this year, Ohtani said: “Definitely leads to motivation for me to do better, I mean trying to go for that hardware is something I think about. For the most part, I just take it game by game, at-bat by at-bat and at the end of the day, we’ll count it all up.”

Ohtani had been itching at a big extra-base hit all night.

He was robbed of a…