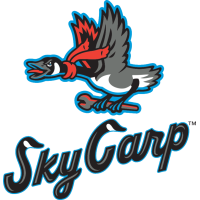 GRAND CHUTE, WI – A 3-run Wisconsin rally in the bottom of the eighth inning pushed the Timber Rattlers past the Sky Carp 6-5 on Friday night at Neuroscience Group Field.

The rally marks the fourth time in four games Wisconsin has scored against Beloit in the eighth, totaling to 13 runs.

The Sky Carp fell behind early, as starter Jake Walters let up three runs on three hits, including a solo homer from Eduardo Garcia.

Beloit immediately responded with a three-run rally of their own, capped off by a whacky bases loaded double play that allowed two runs to score.

The game remained tied until the fifth, when Dalvy Rosario scored Federico Polanco on a sac fly after Polanco’s leadoff triple to open the inning.

The Sky Carp lead swelled to two with a Brady Allen infield RBI single in the top of the seventh. However, the scoring stopped there, as Beloit stranded the bases loaded in the inning and stranded two more in the eighth.

The lack of insurance would cost them.

Luarbert Arias struck out the first batter he faced in the bottom of the eighth, but then walked Ernesto Martinez, to bring the tying run to the plate, represented by Garcia.

The T-Rats shortstop delivered, belting his second homer of the game to knot the contest at 5.

After another strikeout, Wisconsin tallied back-to-back two-out doubles, one from Zack Raabe, and the game tying knock by Antonio Pinero.

Beloit managed a one-out walk from Kyler Castillo – his fifth of the night – in the ninth, but Allen rolled into a game-ending double play.

The Sky Carp will have another crack at Wisconsin tomorrow night at 6:40pm with Gabe Bierman on the mound. Fans can tune in for free on the Big Radio app.