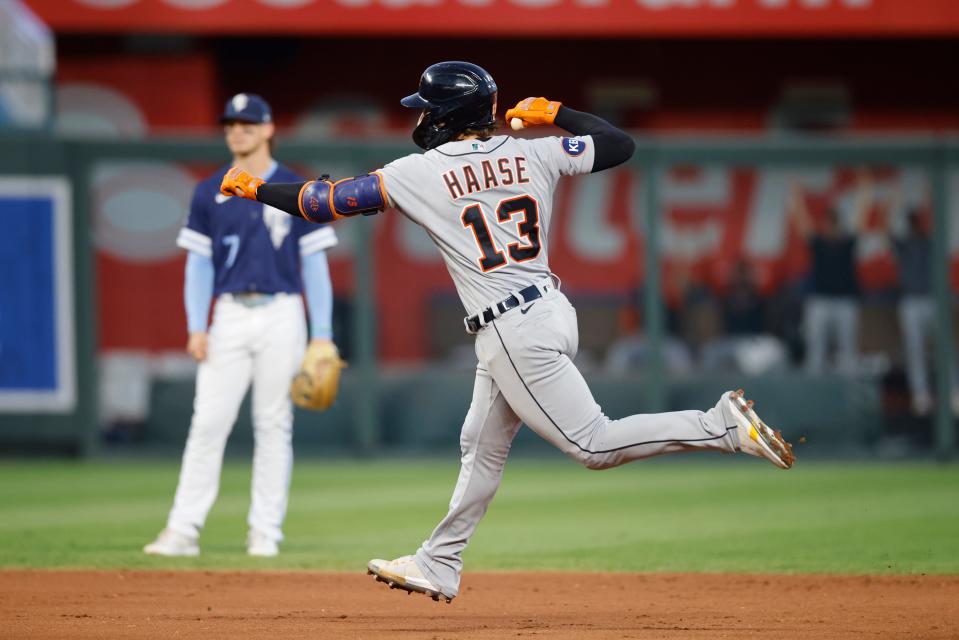 Over the past two games, Detroit Tigers catcher Eric Haase has eight hits — three home runs and three doubles — in 10 at-bats. He hammered two home runs, totaling 12 this season, and doubled on a blooper in Friday’s 10-2 win over the Kansas City Royals in the first of three games at Kauffman Stadium.

The first home run, a solo homer off left-hander Daniel Lynch, put the Tigers ahead 1-0 in the first inning. The second homer, a solo shot off right-hander Brad Keller, extended the Tigers’ lead to 8-0 in the sixth.

Left-hander Joey Wentz — born in Lawrence, Kansas City — joined the Tigers (53-85) for the third start of his MLB career. He struggled in his first start, then suffered a shoulder injury in his second outing. This time, Wentz tossed 6⅔ scoreless innings with five strikeouts. He commanded his fastball and tossed in a handful of cutters (four swings and misses) to keep the Royals off balance.

Jeimer Candelario, serving as the designated hitter, went 3-for-4 with three RBIs. He struck out swinging in the seventh, walked in the ninth and ended a triple shy of the cycle. Rookie Spencer Torkelson finished 3-for-5 (all singles, two on fastballs) in his sixth game since returning from Triple-A Toledo.

The Royals reached base three times against Wentz.

Salvador Perez singled in the first inning, Vinnie Pasquantino doubled in the fourth and Pasquantino walked on five pitches in the seventh. After the one-out walk, Wentz retired Kyle Isbel to complete his outing. He received an ovation from fans of both teams on his way back to the dugout.

Right-handed reliever Jose Cisnero needed three pitches for the third out in the seventh inning. Left-hander Daniel Norris allowed one run in the eighth and another in the ninth.