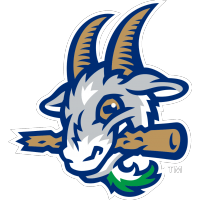 Hartford, CT- Jeisson Rosario broke a 1-1 tie with a solo home run in the 9th inning, leading the Somerset Patriots to a 2-1 victory against the Hartford Yard Goats at Dunkin’ Donuts Park. Hunter Goodman and Willie MacIver each had a pair of hits for the Yard Goats who have dropped their last four games.

The Yard Goats remain in the playoff race as Somerset is within two games of Portland. If Somerset wins the second half then Yard Goats have a chance to make the Post-Season with the second best overall record (72-57). Somerset hosts Portland for six games next week.

Yard Goats starter Noah Davis retired 11 of the first 12 batters with five strikeouts over the first four innings. Somerset scored the first run of the game on Max Burt RBI single in the fifth inning. Hartford tied the contest at 1-1 in the bottom of the fifth on Willie MacIver’s RBI grounder off Patriots starter Randy Vasquez. The run was set up on a double by Kyle Datres.

The game remained 1-1 until the ninth inning. Jeisson Rosario led off the inning with a solo home run to make it 2-1 Patriots. The Yard Goats were retired in order in the bottom half of the inning.

The Yard Goats and Patriots play the fifth of a six-game series on Saturday night 6:05. The game will be broadcast on AM 1410 WPOP, FM 100.9 and on the i-heart radio app.