Slumping Bryce Harper gets a rest, will return Saturday for Phillies 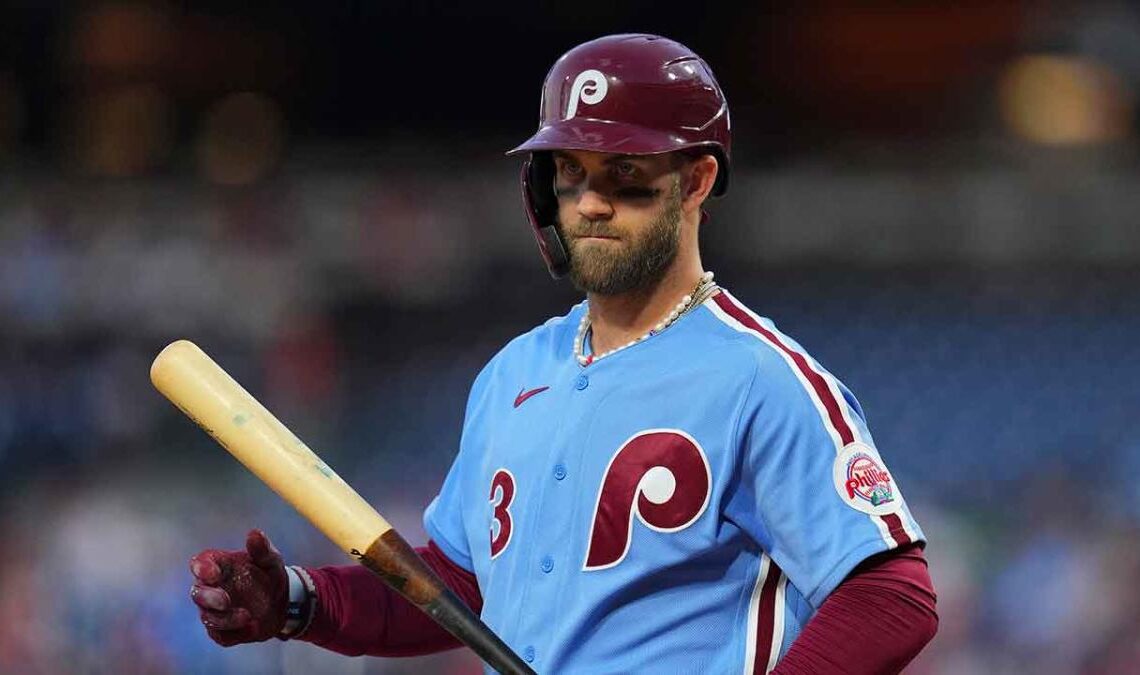 Bryce Harper has looked like he could use a day off the last couple of games.

He got one Friday night.

Harper was not in the Phillies‘ starting lineup for a series opener against the Washington Nationals at Citizens Bank Park.

“Just a day off,” manager Rob Thomson said. “He’s healthy. He’ll be back in there tomorrow.”

Harper was available to pinch-hit.

Harper missed two months with a broken left thumb and played in just two minor-league rehab games last month. In 12 games since returning to the big club, he is 11 for 42 (.262) with three doubles, a .380 on-base percentage and no homers.

Over his last six games, Harper has just three hits — two singles and a bloop double — in 21 at-bats. He struck out 10 times in his last four games. Sitting out with lefty Patrick Corbin on the mound for Washington made sense.

Thomson was asked about the quality of Harper’s at-bats.

“Early, they were real good,” the manager said. “It looks like the bat speed is there. I think anybody that comes back from a short rehab stint kind of takes off then plateaus then maybe fatigue sets in, or whatever, so he might be going through a little bit of that. But it’s just a day off and he’ll be back tomorrow.”

Harper hit primarily out of the No. 3 spot before his injury. He’s hit fourth, behind Kyle Schwarber, Rhys Hoskins and Alec Bohm, since returning. Thomson likes that setup because it puts two right-handed hitters between Schwarber and Harper, who both hit from the left side.

Schwarber’s on-base percentage since the end of June is just .264.

Thomson said he thinks about potential lineup configurations all the time, but it does not sound like moving Schwarber out of the leadoff spot and Harper back to the No. 3 spot is in his immediate plans.

“Not yet,” he said of moving Harper.

Thomson, who at times has mentioned that Bryson Stott has the qualities to hit leadoff, went on to speak about Schwarber in the leadoff hole.

“I’m expecting Schwarb to get hot at any point and then we don’t have these conversations because that’s how he is,” Thomson said. “He was cold at the start of the season then he got hotter than anything. So he’s just going through a little spell right now. That’s how I see it.”