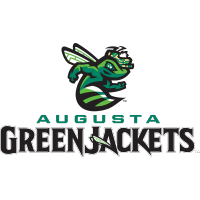 KANNAPOLIS, NC: The Augusta GreenJackets (32-31) took down the Kannapolis Cannon Ballers (31-33) on Friday night behind a five-run eighth inning to pull away late.

Atlanta’s first-round draft pick Owen Murphey set the tone on Friday as the starting pitcher by dealing the best outing of his young career, tossing four shutout innings with no hits and five strikeouts with just one walk allowed.

Neither team could crack the scoreboard through the first six innings of the game, but Augusta changed that in the top of the seventh by scoring the first run of the night on a two-out, RBI double by Ethan Workinger to plate David McCabe, giving the GreenJackets a 1-0 lead.

Kannapolis entered the bottom of the seventh being no-hit but they ended that run with a leadoff double by Jacob Burke, who would later score in the frame on a sacrifice fly by Benyamin Bailey to even the game at one.

But Augusta would retake the lead in the eighth and then some without the benefit of a hit. With the bases loaded, the go-ahead run scored on a walk to David McCabe to make it 2-1. Noah Williams was the next batter and he was hit by a pitch to force in another run to up the lead to 3-1. Another run scored on a balk, followed by an error off the bat of Mahki Backstrom, scoring David McCabe to increase the advantage to 5-1. Ethan Workinger concluded the inning with a sacrifice fly to bring home Noah Williams to give the GreenJackets a strong lead of 6-1.

The pitching would finish the job from there as Rainiery Rodriguez tossed a perfect eighth with Rob Griswold doing the same in the ninth to cap off a 6-1 win for Augusta.

Rainiery Rodriguez (4-5) was the winning pitcher as he threw four innings out of the bullpen with four strikeouts, one walk, and one run allowed. Liam Jenkins (2-1) took the loss for the Cannon Ballers as he allowed all five runs in the eighth.

Ethan Workinger finished the night as the lead run producer as he brought home two runs on his double in the seventh and sacrifice fly in the eighth. David McCabe picked up an RBI on a bases-loaded walk while he also scored two runs to highlight Friday’s top offensive performers.

JR Ritchie is set to get the start on Saturday night for the GreenJackets against left-hander Jose Jimenez for the Cannon Ballers with first pitch scheduled for 7:05 p.m.