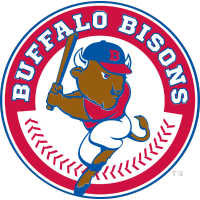 BUFFALO, NY – The Buffalo Bisons dropped their second straight game to the Gwinnett Stripers with a 4-1 loss on Saturday night at Sahlen Field.

The Stripers scored first without the benefit of a base hit in the first inning, thanks in part to three straight walks to start the game. Delino DeShields Jr. was the first of the three walks issued by Bowden Francis; he would score on a sacrifice fly off the bat of former Bison Tyler White. The veteran hitter’s 57th RBI of the season gave Gwinnett a 1-0 lead.

Buffalo answered in the bottom of the second inning against Darius Vines. Yoshi Tsutsugo reached on a lead off double to left center field. He scored two batters later thanks to a Trevor Schwecke single. The Herd finished the inning with three hits but failed to take the lead. The two teams were tied 1-1 after two frames.

It was short lived, however as Gwinnett re-took the lead in the top of the third as part of a three-hit inning against Matt Peacock. Rylan Bannon recorded his 75th RBI of the season to score Hernan Perez and a help the Stripers to a 2-1 advantage over Buffalo.

The Stripers extended the lead to 4-1 on Ryan Casteel’s 16th home run of the season. His two-run homer cleared the screen in left field and scored Pat Valaika. The homer came off of Tayler Saucedo. The lefty worked an inning as part of his third Major League injury rehab appearance since re-joining the Bisons.

Buffalo used a total of seven pitchers, with Peacock suffering the defeat. Eric Yardley needed just one pitch to leave runners on the corners in the top of the ninth.

Vines won his first career Triple-A game by allowing just one run on five hits over five innings. Michael Tonkin was credited with his second save in as many games, giving the righty 13 on the season.

The Bisons and Gwinnett will close out the six-game series on Sunday afternoon at 1:05 p.m. A Herd victory would give the team the season series victory over the Stripers.