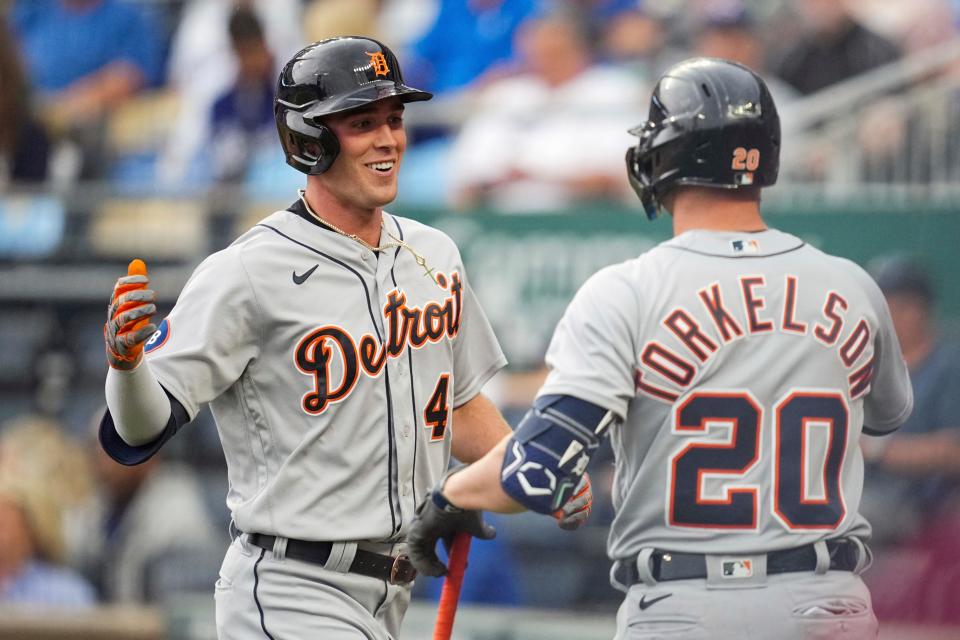 The Detroit Tigers, swinging in the rain, beat up on the Kansas City Royals for the second time in as many days. The offense scored 10 runs Friday, then eight more runs Saturday.

An 8-3 rain-shortened victory gives the Tigers a chance to sweep the series Sunday at Kauffman Stadium. Rookie Kerry Carpenter hit a solo home run, his fourth of the year, in the second inning.

Right-hander Matt Manning pitched into the seventh inning and allowed three runs (two earned runs) on three hits and one walk with four strikeouts. He threw 60 of 94 pitches for strikes.

The Royals scored first in the first inning on Salvador Perez’s RBI single after Bobby Witt Jr.’s one-out double. It was Witt’s 24th double of the season.

Manning held the Royals scoreless until the fourth inning, when Perez opened the bottom half of the frame with a single. He scored on Michael A. Taylor’s groundout for the second out in the inning. Manning struck out Michael Massey, the next batter, to end the fourth.

By that point, though, the Tigers were in control, 4-2. Manning exited with one out in the seventh, replaced by left-handed reliever Andrew Chafin. Although the Royals scored two runs in the bottom of the seventh, which began with Manning’s walk to Pasquantino, Chafin struck out MJ Melendez with two runners on base to escape.

Chafin allowed an unearned run on a hit and a walk. Both runs in the seventh — one charged to Chafin, another to Manning — were unearned because of a fielding error by Harold Castro on Javier Báez’s throw in attempt to get a force out at second base. Castro missed the ball.