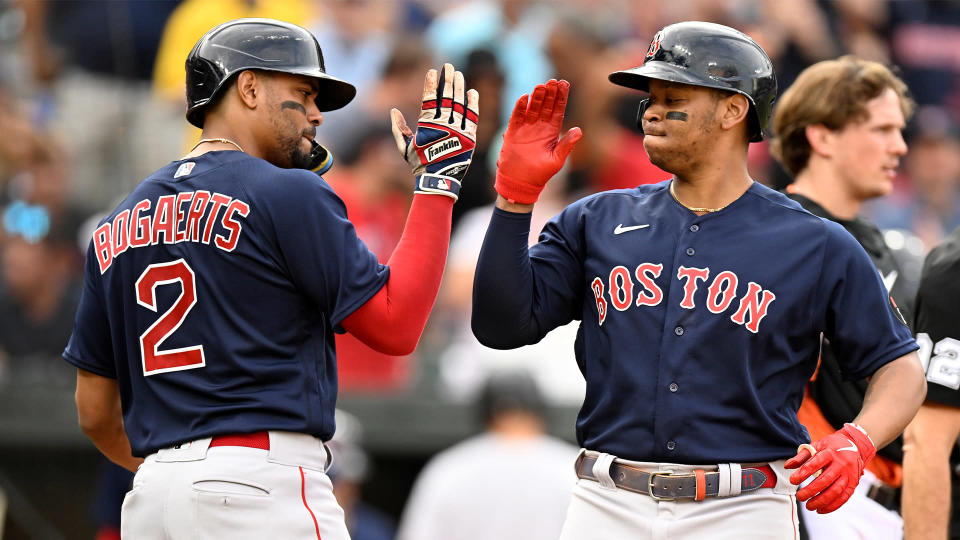 BALTIMORE — Rafael Devers hit a first-inning grand slam, Kike Hernandez had four hits and the Boston Red Sox slugged their way to a 17-4 rout of the Baltimore Orioles on Saturday.

Jordan Lyles (10-10) couldn’t make it out of the fourth in his first start this month, and the Orioles lost for the fifth time in seven games. Baltimore entered four games behind Seattle for the final wild card in the American League.

Christian Arroyo hit a two-run homer in the fifth for the Red Sox, who had already broken the game open by then. Boston snapped a four-game losing streak, and Michael Wacha (11-1) extended his unbeaten run to 11 starts.

Lyles missed his previous turn because he was sick, and this one was bad from the beginning. A walk, a single and a hit batter loaded the bases for Devers, who cleared them with a drive to left-center field. It was his 26th homer of the year and the first of three hits on the night for the star third baseman.

Cedric Mullins went deep for the Orioles in the third, but Boston responded immediately with four more runs in the fourth. Hernandez and Kevin Plawecki hit consecutive doubles to make it 5-1. With two out, Alex Verdugo hit an RBI single and then Xander Bogaerts singled to chase Lyles.

Devers singled off reliever Keegan Akin to make it 7-1, and Trevor Story followed with a run-scoring single of his own.

Wacha permitted three runs and six hits in six innings, with five strikeouts and no walks.

Arroyo’s home run made it 10-1. Boston finished with 21 hits, five of which came in a six-run ninth that ended with Orioles outfielder Ryan McKenna on the mound.

Red Sox: LF Tommy Pham exited in the fourth with a bruised left shin. … Story appeared to be hit by a pitch while swinging at it in the first. It was ruled a strikeout and he remained in the game. … RHP Nathan Eovaldi (shoulder) threw a bullpen before the game.

Boston LHP Rich Hill (6-6) starts against Kyle Bradish (3-5) on Sunday in the final game of the series.