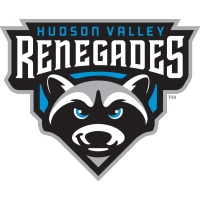 ONE MORE SERIES FOR THE ROAD: The Renegades hit the road for the final series of the 2022 regular season this week against the Wilmington Blue Rocks. This is just the third series of the season between the two clubs, and the first time they’ve met since July 22-24. The Gades are 7-6 against the Blue Rocks this season.

DON’T CRY BECAUSE IT IS OVER, SMILE BECAUSE IT HAPPENED: With the loss by Hudson Valley and the win by the Brooklyn Cyclones over the Winston-Salem Dash on Friday night, the Renegades were officially eliminated from playoff contention in the 2022 season. The Renegades were locked in a tight race all summer, with Saturday marking the first time that the SAL North has been separated by more than 1.5 games since the star of play on July 22. Brooklyn has gone 14-2 in its last 16 games to win the second half.

ABOUT LAST NIGHT: The Renegades took an early 4-0 lead, but ultimately fell 5-4 to the Wilmington Blue Rocks on Friday night at Frawley Stadium. Jasson Domínguez went 2-for-4 with a home run and two RBIs, while Ben Cowles extended his hitting streak to six straight games with a 1-for-3 effort, including an RBI triple. Trevor Holloway and Nelson Alvarez combined for 4.1 scoreless innings out of the bullpen, though Holloway did allow an inherited run to score.

SOONER BOOMER: With his 22nd home run of the season on Thursday, Tyler Hardman tied the Renegades single-season home run record (Dan Grummitt, 22 in 1999). Hardman also sits second on the Renegades career home run list, even with Grummitt and behind Everson Pereira (23).

MAMMA SAID SHUT YOU OUT: The shutout victory over Wilmington on Thursday was the 10th shutout of the season thrown by the Renegades, and their second in their last seven games. In 2021, Hudson Valley shut out its opponents 14 times.

TAKE YOUR BASE: With two walks on Thursday night, Anthony Seigler has drawn 91 bases on balls this season between the Renegades and Single-A Tampa. He is the first Yankees minor leaguer to walk 90 times in a season since Mike Ford in 2017 (94) (h/t: Tom Kosensky on Twitter). If Seigler is able to draw four more walks this season, he would be the first to…