Offense Comes up Big in 7-5 Win 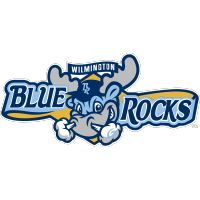 The Wilmington Blue Rocks continue to roll into the offseason on a high note as they defeated the Hudson Valley Renegades for the second time, this time 7-5 on Saturday, September 10.

Unlike their previous victory, the Blue Rocks got on the board first in the bottom of the second when Paul Witt hit an RBI double to left field to drive home Leandro Emiliani and Drew Mendoza. A single from Cole Daily brought Witt home and put Wilmington ahead 3-0.

Hudson Valley didn’t go down quietly though as in the next frame, Jasson Dominguez hit his first of two home runs of the night to cut the Blue Rocks’ lead to 3-1.

Starting pitcher for Wilmington, Dustin Saenz, gave up another home run in the next inning to the Renegades’ Aaron Palensky to make the game 3-2.

It was time for the Blue Rocks to hit a home run of their own in the bottom of the fourth when Drew Mendoza drove the ball out of the park for his seventh homer of the season.

Wilmington would blow this matchup open in the fifth though, starting with Hudson Valley’s relief pitcher Harold Cortijo giving up two walks to Justin Connell and Emiliani. This put men on for Onix Vega’s RBI double and Kevin Strohschein’s RBI single, extending their lead to 6-2.

Vega would reach home himself when Cortijo threw a wild pitch, giving Wilmington their seventh run of the night.

While the Blue Rocks offense was getting hot, Wilmington relief pitcher Carlos Romero was holding it down on the mound, going two innings, recording six strikes out, and shutting down the Renegades’ offense.

In fact, all the other three runs for Hudson Valley would come at the hands of Dominguez as he would hit another home run, an RBI single, and reach home on a wild pitch in the ninth from Wilmington’s Zack Burdi.

With the lack of production from the rest of Hudson Valley, the Blue Rocks secured the 7-5 victory heading into their final game of the season. First pitch is set for Sunday, September 11 1:05 p.m.