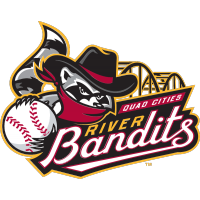 Davenport, Iowa – The Quad Cities River Bandits lost their second-to-last game of the season on Saturday, falling to the Peoria Chiefs 4-3 at Modern Woodmen Park.

After Quad Cities had scored first-inning runs in back-to-back ballgames during their previous two contests, it was the Chiefs who jumped in front first in the opening frame against Beck Way, as Osvaldo Tovalin picked up his first of three hits with an RBI single.

One inning later, Quad Cities tied the game 1-1 against Peoria’s Austin Love on a sacrifice-fly from Tyler Tolbert, but left two men in scoring position for the second consecutive frame.

In the third, both teams scored for the final time against the starters, with Noah Mendlinger driving in a run on a triple and Tovalin scoring him with another single, while Juan Carlos Negret plated Darryl Collins’ leadoff walk with a two-run homer for his team-leading 17th of the season.

Way didn’t return for the fourth for Quad Cities, having thrown 82 pitches in 3.0 innings and allowing three runs on six hits, one walk, and six strikeouts.

Love used a double play to nullify a pair of Bandit singles in the fourth, but would hand the keys to the bullpen for the fifth, on the hook for three runs of his own on seven hits, four walks, and five strikeouts.

For the final five and a half innings, both bullpens would combine to allow just five hits.

Anthony Simonelli, the Bandits’ first arm out of the ‘pen, stuck out a season-high seven batters in 3.0-scoreless innings, while Peoria’s Nick Trogrlic-Iverson faced the minimum for three frames, allowing his team to take a 4-3 lead in the eighth on a Harrison Beethe wild pitch- scoring Mack Chambers who had reached on a leadoff walk.

Delvin Capellan pitched a scoreless top of the ninth for Quad Cities, stranding the bases loaded to keep his teams’ deficit at one, but Trogrlic-Iverson returned for his fifth inning of work and needed just eight pitches, including strikeouts of Tolbert and Peyton Wilson, to shut the door on Q.C. loss in the bottom of the ninth.

With a season-high 5.0-scoreless innings and allowing just two base runners as the only man out of the Chiefs’ bullpen, Trogrlic-Iverson (4-4) earned the win for Peoria, while Harrison Beethe (0-3) took the loss of the Bandits, allowing one run in 2.0 frames.

Quad Cities will look to salvage a split of the series in their final game of the season on Sunday, as Chandler…