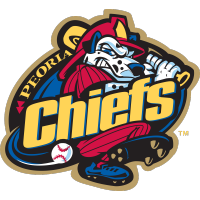 Davenport, IA – Canadian right-hander Nick Trogrlic-Iverson twirled five scoreless innings out of the Peoria bullpen to help pace the Chiefs past the Quad Cities River Bandits 4-3 on Saturday. With the win, Peoria secured at least a split of this week’s series as well as the season series.

In what was the final night game of the regular season, both starting pitchers were on the ropes in the early innings. Quad Cities starter Beck Way recorded a strikeout to begin the game but a Noah Mendlinger single and a Jacob Buchberger walk placed runners at first and second with one out for Osvaldo Tovalin. On the seventh pitch of the AB, Tovalin singled to left to plate Mendlinger and give Peoria a 1-0 lead. Way recalibrated to get out of the inning without further damage but he needed 36 pitches to get through the frame.

After Peoria starter Austin Love worked around a pair of first inning baserunners, Quad Cities got to the league leader in strikeouts in the bottom of the second. After consecutive walks, a River Town single loaded the bases with no one out. After Love whiffed Saul Garza, a Tyler Tolbert sac fly knotted the score at 1-1. Love avoided further trouble but he logged 26 pitches in the process.

In the third, the Chiefs jumped right back in front. After a Lott single, Mendlinger tripled into the right field corner to bring Lott all the way around from first and give Peoria the lead right back, 2-1. Two batters later, it was Tovalin again. The first baseman singled home Mendlinger to double the Peoria lead.

Quad Cities wasted no time answering the Chiefs third inning, however. After Darryl Collins worked a walk to kick off the frame, Juan Carlos Negret connected on a two-run homer to left center to quickly tie the score. Love ultimately was lifted after four innings and finished the year with 151 strikeouts, tied with Cliff Politte with the most punchouts in a single season since 1996.

In the eighth, the Chiefs manufactured a run to jump in front for good. Mack Chambers worked a full count before ultimately drawing a walk to kick off the inning. After he swiped second, Chambers tagged to third on a deep fly out from Patrick Romeri. Chambers’ dash to third instantly paid off as on the next pitch, River…