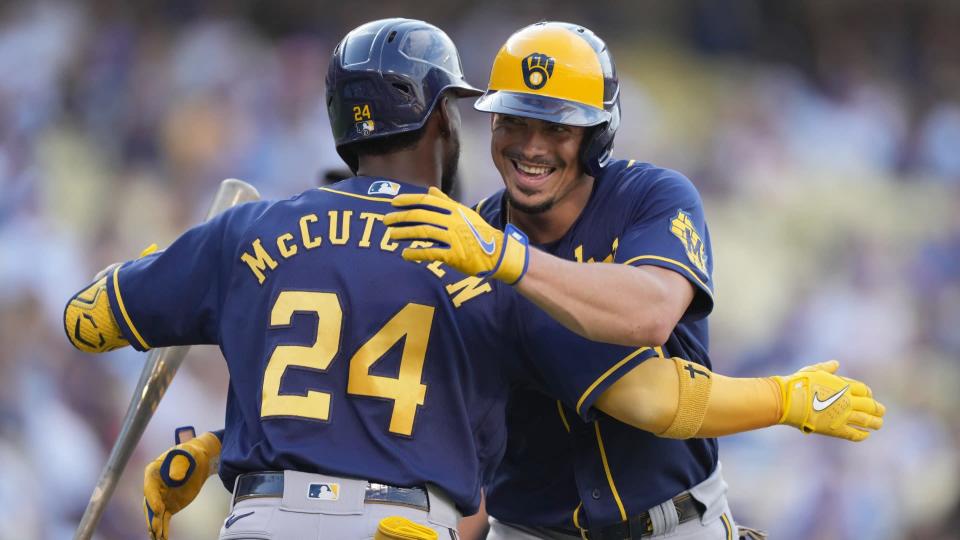 MILWAUKEE – Willy Adames and Andrew McCutchen each hit a two-run homer, and Adrian Houser allowed one hit in six innings as the Milwaukee Brewers beat the Cincinnati Reds 5-1 on Saturday night.

Houser (6-9) permitted a leadoff double by Jose Barrero in the third and a sacrifice fly by TJ Friedl – but nothing more. The right-hander turned a 2-1 lead over to the bullpen, and the Brewers easily held on.

Taylor Rogers pitched a 1-2-3 seventh, Matt Bush struck out the side in the eighth and Brad Boxberger handled the ninth for Milwaukee, which is chasing an NL wild card.

Adames connected off Chase Anderson (0-3) in the first inning for his 27th home run, tying Corey Seager of the Texas Rangers for most in the majors by a shortstop.

McCutchen hit his 16th homer in the eighth after Hunter Renfroe doubled off Joel Kuhnel.

Milwaukee made it 3-1 in the seventh. Tyrone Taylor legged out a triple when his drive to left field skipped under Jake Fraley‘s glove and rolled all the way to the wall. Taylor came home when Christian Yelich slapped a base hit through a drawn-in infield.

The Brewers had the bases loaded with two outs in the fifth but failed to score. Fernando Cruz relieved Reiver Sanmartin and retired Renfroe on a fly to center.

Anderson struck out five, walked three and gave up just the one hit by Adames over four innings in his third start since the Reds signed the former Brewers pitcher (2016-19) to a minor league contract on Aug. 27. It was his longest outing this season.

Reds: RHP Graham Ashcroft (right biceps) is scheduled for a rehab assignment Wednesday at Double-A Chattanooga. He’ll be on a 50-pitch limit. . C Aramis Michael Garcia (left middle finger) continues to make progress. His next step is live batting practice. “He’s getting there,” manager David Bell said. “We’re running out of time, but I still think he has a chance to play this year.”

Brewers: LHP Aaron Ashby (left shoulder) is scheduled to throw off a mound Sunday or Monday. . RHP Trevor Gott (right forearm) will likely pitch at Class A Appleton on Sunday and, if all goes well, he’ll move up to Triple-A Nashville.

RHP Luke Farrell, claimed off waivers Friday from the Chicago Cubs, was added to the 28-man roster and RHP Art Warren was optioned to Triple-A Louisville.