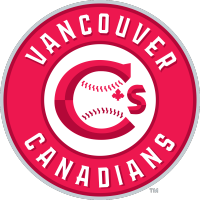 VANCOUVER, BC – The Canadians lost their third game in a row on Saturday, a 4-2 defeat at the hands of the Eugene Emeralds (Giants) in front of a sellout crowd at The Nat.

Vancouver fell behind early after a lead-off home run from Grant McCray to start the game and a two-out RBI single courtesy of Hunter Bishop in the third inning, but the C’s roared back to tie the game in the bottom of the third. Garrett Spain worked a walk to spark the rally, stole second and from there was joined on base by Andres Sosa, who reached via a two-out free pass. PK Morris followed with an RBI single to spoil the shutout and on the very next pitch #9 Blue Jays prospect Gabby Martinez tied the game with a base hit to centerfield.

Dahian Santos – the #12 Blue Jays prospect at just 19 years old – would work a total of four innings and allowed those two Ems runs on five hits with two walks and seven strikeouts before passing the baton to Naswell Paulino, who went six up, six down over two innings of perfect relief. Then came Devereaux Harrison, who also put up two zeroes to keep Eugene at bay.

Despite the strong relief work, the C’s couldn’t muster any offense of their own and the game stayed tied 2-2 until the top of the ninth. A lead-off walk, a single, a sac bunt, a run-scoring error and a sacrifice fly plated two runs (only one of them earned) to put the Emeralds in front 4-2, and despite the Canadians bringing the tying run to the plate in the home half Eugene managed to hang on to hand Vancouver their fifth loss in their last six games.

Since clinching a spot opposite the Emeralds in the Northwest League Championship Series next week, the C’s are 0-3 and have surrendered six runs in the ninth inning over their last two games, though only three of those six runs are earned.

The 2022 regular season slate wraps up tomorrow at 1:05 p.m. with an A&W Family Fun Sunday. Coverage is available on CanadiansBaseball.com, MiLB.TV and the Sportsnet Radio Network.