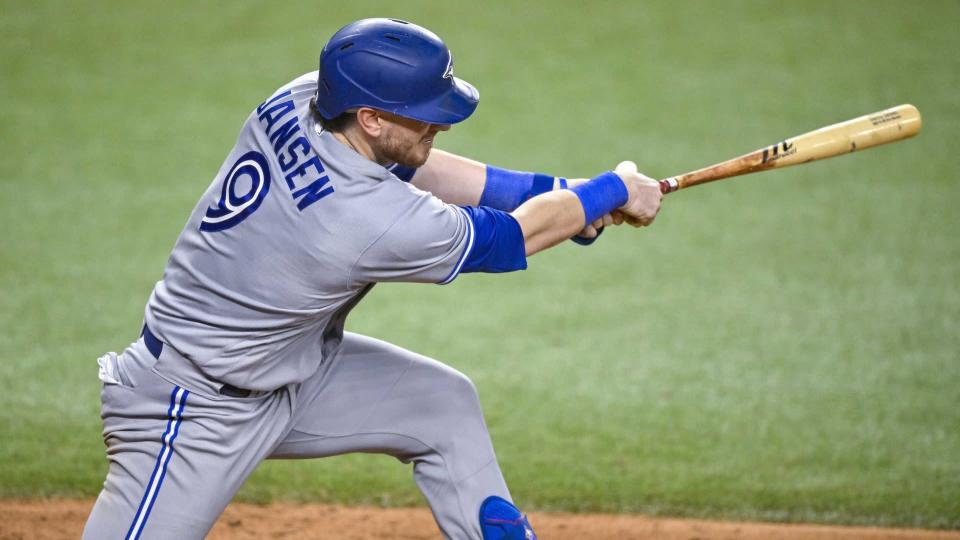 ARLINGTON, Texas – Danny Jansen homered and matched a career high with four hits, Santiago Espinal tied his career highs with three hits and three RBIs, and Raimel Tapia hit a three-run homer as Toronto’s bottom of the order led an early onslaught in an 11-7 victory over the Texas Rangers on Saturday night.

“Janno, Tap, Spee, those guys – I think they’ve been pretty consistent all year doing that in that part of the lineup,” Blue Jays interim manager John Schneider said. “When you’re doing that with the top of order (also hitting) . it’s a pretty good mix.”

All 11 Blue Jays runs came in the first four innings, helping Kevin Gausman to his fourth consecutive win. The Blue Jays are a season-best 18 games over .500 and pulled within one-half game of AL wild-card leader Tampa Bay.

Gausman (12-9) allowed five runs on two homers – a three-run shot by Adolis Garcia in the first inning and a two-run homer by Sam Huff in the sixth. He went 5 1/3 innings, striking out nine, which is one short of his season high.

Bo Bichette, who had five homers in his previous four games, hit three doubles all to the opposite field. This month, Bichette is hitting .525 with a majors-best 21 hits, six homers and 18 RBI, hitting safely in eight of nine games.

“We know he’s good, and this is the best version of Bo we’ve ever seen,” Schneider said.

The Jays batted around twice in the first three innings against Kohei Arihara (1-3), who also gave up a two-run homer to Jansen in the fourth. Tim Mayza earned his first save of the season.

Garcia’s home run, which snapped an 0-for-11 streak, had an exit velocity of 113 mph to equal his career best. He returned to the lineup for the first time since Tuesday and, still bothered by a sore glute muscle, was the designated hitter instead of playing in the outfield.

Rangers interim manager Tony Beasley said he stuck with Arihara longer than he wanted to against the club that leads the majors in hitting at .261 because Texas will play five games in the next four days.

“He pitched in hitter-friendly counts for the most part of his night,” Beasley said, “and this is a tough team to do that with.”

The Rangers have lost 12 of their last 13 games, falling a season-low 20 games under…