Curve Fall in Extras to Erie on Sunday 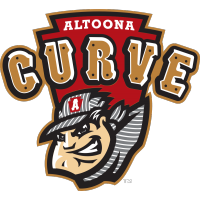 ERIE, Pa. – Liover Peguero crushed his ninth home run of the season and the Curve rallied for two extra-inning leads, but Altoona managed just two hits and lost on a walk-off sacrifice fly in the 11th inning, 6-5, on Sunday at UPMC Park.

Altoona rallied for runs in the top of the tenth and eleventh innings. With the game tied 3-3, Henry Davis advanced from second to third on a passed ball by catcher Michael De La Cruz and scored on a Lolo Sanchez sacrifice fly to give Altoona a 4-3 lead.

Erie opened the bottom of the tenth with a single from Gage Workman that moved Dane Myers to third and allowed Workman to go to second. Colin Selby then intentionally walked De La Cruz before Daniel Cabrera tied the game with a sacrifice fly. Selby then followed with back-to-back strikeouts with runners in scoring position to force the 11th inning. Selby allowed just the one unearned run in one inning.

In the 11th, Nick Gonzales grounded out to move Peguero to third. Matt Gorski then hit a ground ball to third base that went through Workman’s legs, allowing Peguero to score on the error. In the bottom of the inning, Erie loaded the bases off Brad Case on a walk and a hit. Quincy Nieporte then grounded into an RBI-fielder’s choice before Myers hit the walk-off sacrifice fly to center field.

Peguero’s home run came in the sixth inning and was the first hit of the day for Altoona. It was a two-run shot that gave the Curve a 2-1 lead. Erie would quickly retake the lead in the bottom of the sixth on a Bryant Packard RBI-double off Omar Cruz and a fielding error from Gonzales. Cruz allowed two runs, one earned, in 1.2 innings.

Davis would tie the game back up for the Curve in the seventh inning. After an Aaron Shackelford walk, Davis slugged a two-out double off Adam Wolf to tie the game at three runs apiece.

With the Curve loss paired with an Akron win and a Bowie loss, Altoona sits in fourth place in the Southwest division at -3.5 games back with six games to play. Bowie and Erie are tied for first place, with Akron two games behind them. Erie travels to Richmond next week, while Bowie travels to Akron.