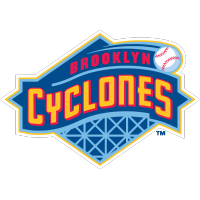 WINSTON-SALEM, NC – On the final day of the regular season, the Brooklyn Cyclones, the High-A affiliate of the New York Mets, dropped a single-admission doubleheader to the Winston-Salem Dash, losing 5-4 in game one before a 4-3 loss in extra innings at Truist Stadium. Brooklyn won four of the six games on the trip.

Leading 4-3 in the bottom of the fourth, Winston-Salem extended its lead to 5-3 when James Beard scored on a double play ball against Brooklyn starter Junior Santos.

The Cyclones cut into an early 4-2 deficit with a run in the fourth and a run in the fifth. Brooklyn made it 4-3 when Juan Loyo singled against Dash starter Brooks Gosswein in the fourth. In the fifth trailing 5-3, the ‘Clones scored on Joe Suozzi’s run-scoring single to center field, bringing in Jose Peroza.

Winston-Salem relievers Skylar Arias and Luis Amaya combined to keep Brooklyn scoreless over the final two innings. In the seventh when Peroza singled and Carlos Rincon walked, Amaya struck out Stanley Consuegra and got William Lugo to roll into a game-ending double play.

With the bases loaded in the bottom of the eighth inning, Caberea Weaver singled on a sharp ground ball to Justin Guerrera who could not handle the potential double-play ball, bringing in Alsander Womack from third base to win the game 4-3 on a walk off.

Down 3-0, Brooklyn rallied for three runs in the top of the sixth inning against the Winston-Salem bullpen. JT Schwartz, Jose Peroza, and William Lugo hit three consecutive RBI singles to make it 3-3.

Winston-Salem took an early 2-0 lead against starter Mike Vasil who walked two to begin the bottom of the third inning. A wild pitch and a sacrifice fly from Womack accounted for the runs. In the next inning, Christian Scott allowed a single to Ivan Gonzalez who moved to second base on a passed ball and scored on Harvin Mendoza’s RBI single.