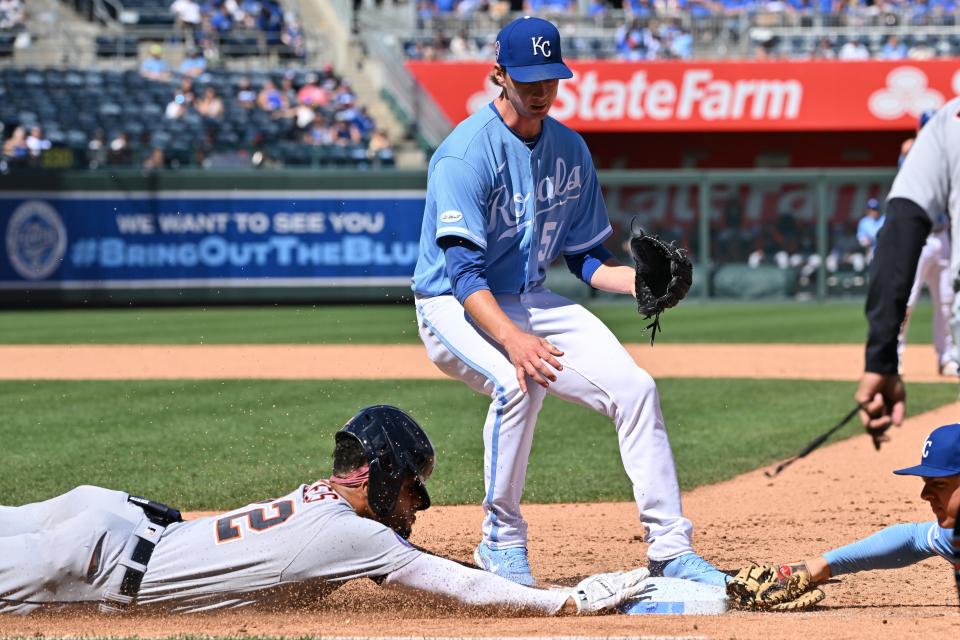 KANSAS CITY, Mo. — Brady Singer threw seven shutout innings to lead the Kansas City Royals to a 4-0 victory over the Detroit Tigers on Sunday to salvage the finale of the three-game series.

Singer (8-4) allowed four hits and one walk, striking out six and retiring 16 of the last 18 batters he faced. The Royals have won six of his last seven starts; he is 4-0 with a 2.25 ERA over that span.

Kansas City jumped on the board in the first inning with Nick Pratto’s sacrifice fly scoring Bobby Witt Jr. Witt had a pair of hits, including a double, his 51st extra-base hit, leading all major league rookies.

DOWN ON THE FAR<:>How 2021 draft pick Izaac Pacheco quickly showed Tigers his ‘it factor’</:>

Drew Waters’ two-out double into the right-field corner scored Michael A. Taylor and Nate Eaton to expand Kansas City’s lead to 3-0 in the second inning.

In the fourth, Michael Massey hit a leadoff homer, the second time he has gone deep this season, to make it 4-0. Each of the Royals’ RBIs were contributed by rookie hitters.

Spencer Torkelson had the Tigers’ only extra-base hit, a one-out double in the seventh.