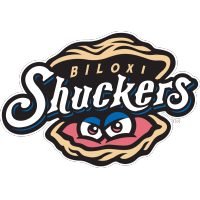 With the game tied at 4-4, RHP Zach Vennaro (W, 5-2) came on in the top of the tenth inning for the Shuckers. The righty induced a pop out from Cody Milligan that kept bonus runner Justin Dean at second. Dean would steal third before a walk to Javier Valdes, but Vennaro struck out the next two batters to leave the go-ahead run at third.

In the home half of the tenth inning, Yeison Coca started at second as the Shuckers’ bonus runner. A busted-bat single up the middle with one out from Terence Doston against LHP Lisandro Santos (L, 2-1) moved Coca to third, bringing up Nick Kahle. The Shuckers’ catcher dropped down a bunt up the first-base line, squeezing in Coca from third to score the winning run for Biloxi. It was the 12th walk-off win of the season for Biloxi, who finish their home slate with a 39-27 record at MGM Park.

Mississippi jumped out to a lead three batters into the game when Valdes was hit by a pitch with one out and Justyn-Henry Malloy hit a two-run homer to left, his sixth of the year, making it 2-0 Mississippi. They were the only runs allowed on the night by lefty Nick Bennett, who spun five frames and struck out seven.

The Shuckers claimed their first lead of the night in the bottom of the second. Wes Clarke and Zavier Warren both walked to start the inning and Doston drove in Clarke with an RBI single to right. Kahle then pulled a double to left, driving in two to give Biloxi the lead at 3-2.

Biloxi would add on another in the bottom of the fourth when Gabe Holt and Corey Ray both singled with two outs and Ethan Murray dropped a single into left, bringing in Holt to double the Shuckers’ lead at 4-2.

LHP Clayton Andrews (H, 2) came on in the top of the sixth and struck out the first batter he faced before three straight singles plated a run for the M-Braves. Mississippi had the tying run at third with two outs, but Kahle chased down the runner when he attempted to score on a wild pitch.

It appeared the Shuckers had added on an insurance run in the top of the seventh inning when Garrett Whitley was hit by a pitch, stole second and then came around to touch home on a double to right by Thomas Dillard. On appeal, though, Whitley was ruled out at third, eliminating the run.