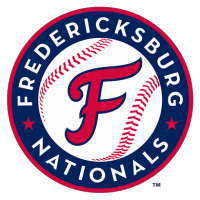 SALEM – The FredNats sent the regular season out in style Sunday in Salem, blasting off for a 14-2 victory to finish the regular slate 75-55.

Will Frizzell paced the explosive offense with another 3-for-6 3-RBI contest. Armando Cruz, playing in just his third Carolina League game, added three hits, a pair of runs and a couple of RBIs. Fredericksburg piled up 19 hits.

Jose Atencio battled rainy conditions to post five innings of one-run ball en route to his fifth FredNats victory. Between the Florida Complex League and the Carolina League, he now has nine wins this season.

Jacob Young scored three times vs. the Red Sox and finished the regular season with 118 runs in 115 games this season. His 118 are the most in Major League and Minor League Baseball.

The FredNats begin the 2022 Carolina League playoffs this Tuesday. The team’s trip to the postseason will be the first for the franchise since the relocation to Fredericksburg.

The playoffs will open with a best-of-three divisional round vs. Lynchburg September 13-16. The winner will meet either Myrtle Beach or Charleston September 18-21 for the championship.

The FredNats finish at 42-22 in the second half. The team will host Lynchburg in the divisional round playoff game to open the postseason September 13 at 7:05 pm. Tickets are available at frednats.com/playoffs.