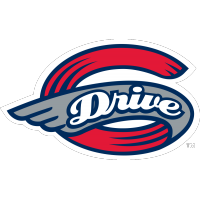 Greenville, SC – The Greenville Drive wrapped up the 2022 season on Sunday with a special Patriots Day event recognizing First Responders and countless heroes throughout the community. As part of the recognition event, the Drive fell to the Asheville Tourists 9-1 in the final Drive game at Fluor Field this season.

Asheville took off immediately with a grand slam in the first inning by Luis Santana – Santana’s tenth home run of the season.

The Tourists’ bats stayed hot as they added three more runs over the second and third innings. Right Fielder Kenedy Corona hit a solo home run in the second inning. J.C. Correa scored on a fielder’s choice in the third.

After a scoreless fourth the Tourists picked up where they left off and put up one run in both the fifth and sixth innings.

The Drive’s first and only run came in the bottom of the seventh when Corey Rosier hit an RBI single to bring home Joe Davis.

As the 2022 Drive season wraps up, the Drive’s 16th season in Downtown Greenville at Fluor Field, the Drive would like to extend a special thank you to everyone throughout the community for their continued support. We can’t wait to see you back at Fluor Field for the 2023 Drive season next April.