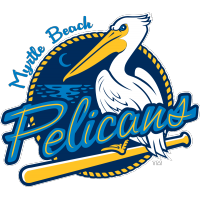 The Myrtle Beach Pelicans had their four-game winning streak snapped with a 7-3 loss to the Carolina Mudcats on Saturday night. With their first loss of the week, the Pelicans now have a 78-52 record and 31-33 in the second half. The Mudcats moved to 68-62 with a 34-30 second-half record. The regular season will conclude with a 6:05 p.m. start time on Sunday night.

Starter Nick Hull (0-1) took the loss with four earned runs in his 3 2/3 innings off six hits and two walks. Luis Rodriguez gave up two more runs out of the bullpen in his 2 2/3 inning outing with two hits and three walks.

With just under five innings in relief, Cameron Wagoner (2-0) earned the win with just one earned run off three hits and three walks while striking out three.