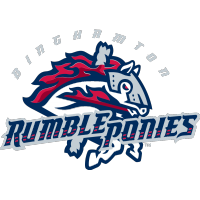 PORTLAND, ME – The Binghamton Rumble Ponies fell to the Portland Sea Dogs 8-5 in a back-and-forth contest in the Rumble Ponies final road game of the season Sunday at Hadlock Field. The Sea Dogs took the last five games of the six-game series.

With the game tied at five in the seventh, Stephen Scott hit the go-ahead RBI single that scored pinch-runner Christian Koss from third to put Portland up 6-5. Two batters later, Tyler Dearden added an RBI single against Grant Hartwig (0-2) to make it 7-5.

The Rumble Ponies scored two in the first, getting on the board first for the fifth time in the series. Each team would score two runs apiece in each of the first two-innings as the game was tied at four heading into the third.

Binghamton (23-38, 51-79) had a runner on second with two out in the eighth, but second baseman Christian Koss made a diving play to rob Rowdey Jordan of a base hit and end the frame. The Sea Dogs would tack on a run in the bottom of the inning on a Ceddanne Rafaela sacrifice fly to take a three-run lead. Rafaela finished with four RBI and David Hamilton had his second consecutive three-hit game for Portland.

Michael Gettys retired the side in order in the ninth for his sixth save of the season. Jacob Wallace (7-2) picked up the win with an inning and two thirds of scoreless relief with no walks and three strikeouts.

The Rumble Ponies begin their final series of the season Tuesday at Mirabito Stadium against the Hartford Yard Goats. First pitch is at 6:35 PM with pregame coverage getting underway at 6:20 PM on the WNBF Rumble Ponies Radio Network.

Postgame Notes: Ronny Mauricio had an RBI single in the fourth to drive in his 83rd run of the season…Young finished 2-4 with a run scored and an RBI…Matt Winaker reached base twice with two runs scored…the Ponies finished 32-37 on the road for the 2022 season and 18-18 in the second half.