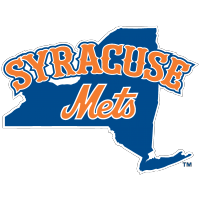 Syracuse, NY – The Syracuse Mets had their three-game winning streak snapped on Sunday as the Rochester Red Wings scored early and often on their way to a 7-2 win on a Sunday afternoon at NBT Bank Stadium. A slow and steady rain fell throughout the nine-inning game. The two teams split the six-game series this past week, and Rochester won 15 of the 24 games overall they played against Syracuse this season.

After the first two innings of the game were scoreless, Rochester (59-76) started to bring out the big bats with a pair of runs in the top of the third. After the first batters in the inning went down in order, Wilmer Perez singled to extend the inning. That was followed by an RBI double from Andrew Stevenson that scored Perez for a 1-0 lead. Then, an RBI single from Lucius Fox scored Stevenson for a 2-0 Red Wings advantage. Both Fox and Stevenson played the role of Mets killer throughout the week-long series. Fox had a hit in each game and drove in nine total runs while Stevenson completed an excellent season against the Mets. On the campaign, the former LSU Tiger batted .294 (25-for-85) with 14 runs driven in.

In the fourth, the Red Wings scored three more times to make it a 5-0 game and put themselves firmly in the driver’s seat for a victory. First, leading off the inning, Jake Alu hit a home run over the fence in right-center field to make it a 3-0 game. Nick Banks then reached on an error and scored on an RBI triple from D.J. Peters for a 4-0 edge. Later in the frame, Peters trotted home when Jecksson Flores lofted a fly into center field deep enough to score Peters on sacrifice fly and make it 5-0. Just one of the runs in the inning was earned against Syracuse (56-79) pitcher, Stephen Nogosek, due to the error committed earlier on in the inning.

In the sixth and eighth innings, Rochester tacked on single runs in each frame to make it a 7-0 game. In the sixth, Banks reached base when he was hit by a pitch with one out. That was followed by singles from Peters and Flores that brought Banks home and made it 6-0 at the time.

Then, in the eighth, Alu led off the inning with a double and later scored on an RBI double from Adrian Sanchez that extended the Rochester lead to 7-0. Alu had a truly phenomenal week at the plate against the Mets. He went a combined 10-for-23 with three doubles, four home runs, and 10 runs driven in.

The Mets got their runs in the bottom of the…