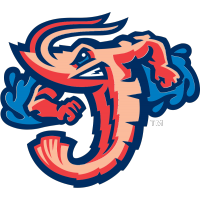 JACKSONVILLE, Fla. -After falling behind late, the Jacksonville Jumbo Shrimp sent 11 batters to the plate in the bottom of the eighth, scoring six runs to take an 11-9 win over the Iowa Cubs Sunday afternoon at 121 Financial Ballpark.

After a five-run top of the eighth that saw Iowa (61-74) take the lead, the Jumbo Shrimp (73-61) mounted a rally of their own in the bottom of the inning. Troy Johnston (4) blasted a solo home run on the second pitch of the inning from Ben Leeper (L, 3-3) to cut the deficit to 9-6. Payton Henry and Erik González followed with consecutive singles. Two batters later, Brian Miller reached on a fielder’s choice. Jordan Groshans walked to load the bases and Jesús Sánchez walked to bring home Henry and make the score 9-7. Following the walk by Sánchez, Willians Astudillo singled for his fourth hit of the day, bringing Miller and Groshans home to tie the game at nine. After pinch-runner Ray-Patrick Didder stole second, Peyton Burdick’s double plated two to put Jacksonville ahead for the final time 11-9.

The Cubs took the early lead in the top of the first. With two outs, Matt Mervis (11) blasted a solo home run to put Iowa ahead 1-0.

Jacksonville responded in the bottom of the first inning. With two outs, Sánchez (3) smacked a solo home run, to tie the game at one.

The Jumbo Shrimp took the lead in the bottom of the fifth inning. Consecutive walks by González and Luis Aviles Jr. started off the inning. A line drive double by Miller plated González as Jacksonville took a 2-1 lead. Two consecutive groundouts by Groshans and Sánchez plated Aviles Jr. and Miller, pushed their advantage to 4-1.

The Cubs didn’t leave Jacksonville’s lead unanswered in the top of the seventh inning. Brennen Davis was hit by a pitch and an error put Jared Young on first. With runners on first and second, Tyler Payne (1) slammed a three-run homer, tying up the game once again at four.

Jacksonville once again broke the tie in the bottom of the seventh inning. With two outs, Sánchez was hit by a pitch. Astudillo doubled to score Sánchez as the Jumbo Shrimp jumped ahead 5-4.

Iowa took their first lead of the game in the top of the eighth inning. Erick Castillo was hit by a pitch and advanced to second off a single by Darius Hill. Levi Jordan bunted to advance both runners to second and third. Mervis walked to load the bases and Davis drew a free pass of his own to…