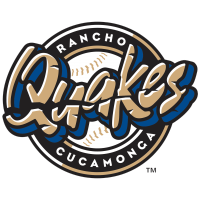 Rancho Cucamonga, CA – The Quakes dropped a double-header to the Lake Elsinore Storm on Saturday night, as they fell in ten innings in game one, by a final of 15-12, then dropped the second game by a final of 2-1 in seven innings at LoanMart Field.

A pair of unearned runs on just three hits was all Lake Elsinore needed in the game-two win, as the Quakes could only muster one run on four hits.

Storm reliever Ben Miller (3-4) fired two scoreless innings in relief to earn the win, while Manuel Castro worked around a lead-off walk in the ninth, retiring the next three hitters to earn his second save.

Rancho let the first game of the double-header slip away, as the Storm tallied four times in the ninth and eventually won in extra innings, dropping three more in the tenth to pull away, 15-12.

Game one of the double-header was a continuation of Friday’s game, which the Quakes led 6-1 at one point and then again by a score of 11-8, before Lake Elsinore’s ninth-inning rally.

Kyle Froemke (2), Dalton Rushing (8) and Alex Freeland (3) all homered in the game-one loss.

The Quakes (32-33, 68-63) will look to end a four-game losing streak on Sunday, taking on the playoff-bound Storm in the season-finale. Neither team has named a starter for Sunday, as the bullpens should both be used heavily. Sunday’s series-finale begins at 2pm and kids will Run the Bases after the game to celebrate the 2022 season’s end. Tickets are available at rcquakes.com. We hope to see you at LoanMart Field…Go Quakes!

• Discuss this story on the California League message board…