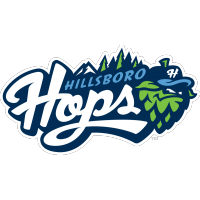 EVERETT, WASH. – This time, the Hillsboro Hops’ late-inning rally fell just short. After back-to-back games overcoming late 7-0 and 2-0 deficits at Everett Memorial Stadium, the Hops’ efforts to overcome a 9-3 deficit entering the top of the eighth came up a run shy, and the Everett Aquasox held on to beat Hillsboro 9-8 on Saturday night. The game was played in a haze of ash from local wildfires.

Everett first baseman Robert Perez hit a two-run home run off Hillsboro starter Luke Albright in the bottom of the first inning, but the Hops answered right away. Center fielder Fox Semones belted a three-run homer in the top of the second to put Hillsboro up 3-2.

Perez, though, was at it again in the bottom of the second. With two out, he again came up with a man on base, and he again smoked a two-run homer. Everett added a run off Albright in the third, and the Sox led 5-3.

Albright worked four innings in his league-leading 26th start, allowing six hits and five runs, all earned. He struck out for, giving him 130 for the season, three shy of the league’s strikeout crown, which will be won by Everett’s Jimmy Joyce.

Everett added three runs off Hops reliever Junior Mieses in the sixth — two on a two-out single by Trent Tingelstad — and would have had more if not for a brilliant play by Gerald Ogando. He had come in to relieve Mieses, and with two out and runners at second and third, Ogando threw a wild pitch. The ball caromed hard off the backstop, past Hops catcher Adrian Del Castillo, onto the dirt just in front of home plate. Ogando raced in, scooped up the ball, and dived to tag out the sliding Tingelstad.

The Sox added another run in the bottom of the seventh on a two-out gift triple by Perez, misplayed in center by Semones. It was 9-3 Everett, and Perez had 11 total bases and five runs batted in.

In the top of the eighth, Hops third baseman S.P. Chen drew a walk, and Del Castillo — who had missed seven weeks in July and August with a broken bone in his hand — belted his first home run since June 17th to cut the deficit to 9-5. Later in the inning, the Hops had two on with two out, but Everett shortstop James Parker made a nice running catch on Ramses Malave’s bloop to shallow center to end the threat.

It was still 9-5 entering the top of the ninth, and when Semones doubled off Everett reliever Tim Elliott, you could almost sense the collective, “Here we go again” from the Sox…