Travs Cut Down in Road Finale 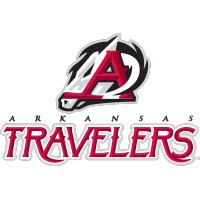 Amarillo, TX – Ross Carver pitched six shutout innings and the Amarillo Sod Poodles beat the Arkansas Travelers, 3-1 on Sunday afternoon. The six game series ends in a three-three split. Carver held the Travs to only three hits and a walk over his six frames to earn the win. A three-run fourth by the Sod Poodles against starter Bryce Miller was the difference in the game. Arkansas got a run in the ninth but stranded the tying runs on base.

* With two out and nobody on in the fourth, Miller issued two walks and then a pair of Amarillo singles, their first two hits of the game, put them up by three.

* The Travs made it interesting in the ninth. Matt Scheffler’s single drove in a run and put the tying runs on but Brent Teller got Patrick Frick on a pop up to end the game.

* The Travelers finished the road portion of the schedule with a 32-37 record.

* With the loss, Arkansas was officially eliminated from playoff contention.

After a day off Monday, the Travs open the final homestand of the season against Corpus Christi. Right-hander Emerson Hancock makes the start for the Travs on the final Mug Club Night of the season. First pitch is at 6:35. The game will also be broadcast on 93.3 The Fish, the First Pitch App and milb.tv.