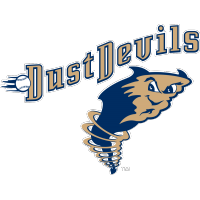 The Indians stormed out the gates, scoring three runs in the top of the 1st inning to start with the lead. While the Dust Devils had base runners in each of the first three innings off starter Case Williams (2-2), they were held off the scoreboard until the 4th.

There Tri-City tied the ballgame with three runs of their own. 1B Gabe Matthews drew a leadoff walk, and LF Casey Dana followed with a double to left field to put runners at second and third. DH Steven Rivas followed with a single to center field scoring both Matthews and Dana to make it 3-2. Later in the inning, with the bases loaded, 2B Kyle Kasser legged out a fielder’s choice to score Rivas and tie the game at 3-3.

The bullpen came to the aid of Dust Devils opener Victor Mederos, with Zac Kristofak throwing three scoreless innings behind Mederos to stem the tide. In the 5th, though, Spokane got to Tri-City reliever Dylan Phillips (1-1), for three two-out hits scoring three runs for a 6-3 lead.

The Dust Devils got a run closer in the 6th inning. C Brendan Tinsman led off with a single to center field, moving up on singles by both 3B Christian Molfetta and Kasser to load the bases. Indians reliever Will Tribucher then walked SS Osmy Gregorio, bringing in Tinsman to get Tri-City within two at 6-4 with the bases still loaded.

Tribucher would get out of the jam without further damage, though, and Spokane added a run in the 9th for the final 7-4 margin. Blake Goldsberry pitched the bottom of the 9th for his third save.

Kyle Kasser led the charge offensively for the Dust Devils, going 3 for 5 with an RBI. Christian Molfetta went 2 for 3 with a walk, and Casey Dana went 2 for 5 with a double. On the mound Jake Smith threw a scoreless inning, and Hayden Seig did the same to celebrate his 24th birthday.

You can listen to the…