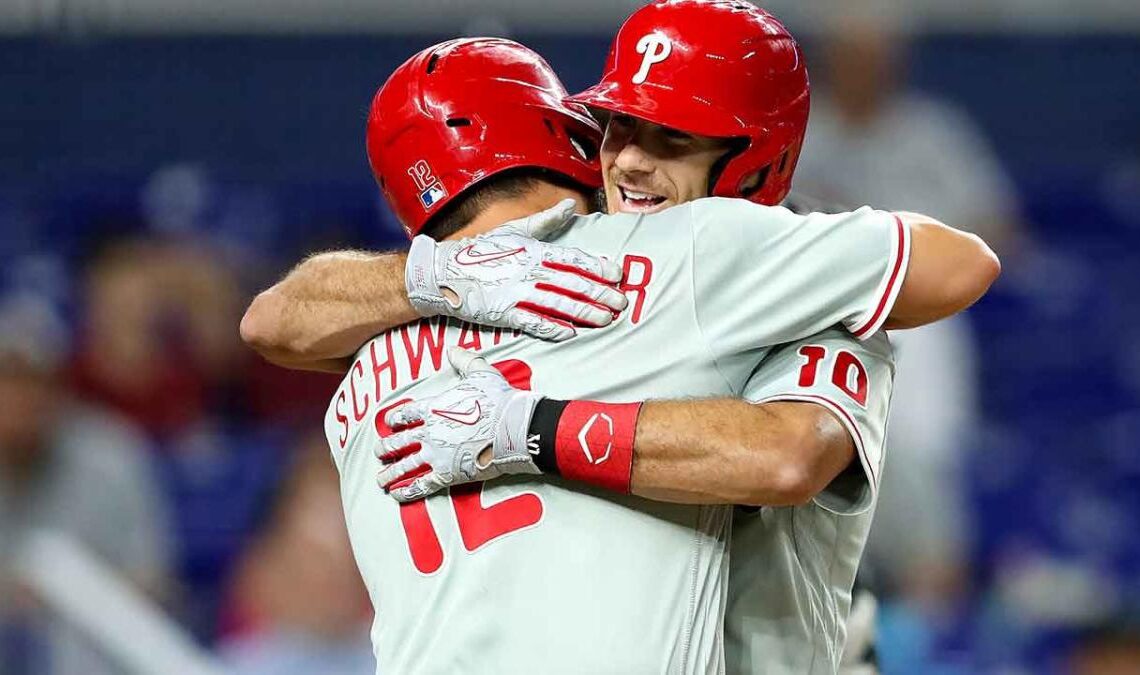 Then Bryce Harper came to the plate in the top of the sixth inning.

The Phillies slugger squared up a full-count changeup from Miami starter Edward Cabrera. The ball came off Harper’s bat with a loud crack at 109 mph and sailed on a line over the wall in left-center. Two pitches later, J.T. Realmuto homered to center against Cabrera and the Phillies were on their way to a 6-1 win in front of a crowd that might have been half the announced 5,642.

Before Harper’s 100th homer as a Phillie, the team had been held scoreless and to one hit by Cabrera. Harper’s homer was the first of four hits by the Phillies in the sixth inning. In addition to the solo homers by Harper and Realmuto, the Phillies got a ringing RBI double from Jean Segura against reliever Richard Bleier.

“The whole team felt like we could take a breath (after Harper’s home run),” Realmuto said. “We had some chances early on to score runs and we weren’t able to get it done. It was just one of those games where we didn’t feel good offensively for four or five innings. We weren’t putting good swings on that guy.

“When Bryce takes that swing, you could feel the pressure come off us a little and we had better at-bats after that.”

An inning after the Phillies broke through, Realmuto hit his second homer of the game, a three-run shot to right, to give the Phils a five-run lead. In his last 20 games, the Phillies catcher has 12 extra-base hits, including five homers, and 22 RBIs.

Kyle Gibson survived four singles and a run in the first inning on his way to six innings of one-run ball and his 10th win. Gibson allowed just two hits after the first inning, walked none and struck out seven.

Zach Eflin pitched the eighth inning and retired the side in order in his first work since June 25. He had been sidelined since then with right knee soreness. Eflin struck out one and his fastball reached 94 mph. He could be a weapon for the club over the final three weeks and beyond.

The victory improved the Phillies to 80-62 and allowed them to take another step toward their first postseason berth in a decade. They control the second National League wild-card spot with 20 games to play. Their lead over San Diego is 2½ games. They lead…