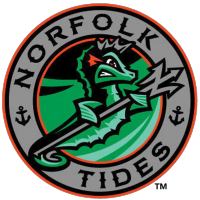 NORFOLK, Va. — The Norfolk Tides (68-69) defeated the Charlotte Knights (54-83), 13-11, on Wednesday at Harbor Park. The Tides have now won 14 of their last 18 games and have won five straight games this season vs. the Knights. The Tides also managed to hit their 152nd home run this season, setting the franchise record.

Charlotte scored first when Carlos Perez knocked an RBI single in the first inning. But the Tides exploded for six runs in the bottom-half. The first run scored was on a wild pitch with a runner on third, then later in the inning Joey Ortiz stole home on a pickoff attempt by Knights starter Tobias Myers. The Tides then hit back-to-back home runs, starting with a three-run shot by Yusniel Diaz and was followed by Brett Phillips to make the score, 6-1 Tides.

The Knights answered with two runs in the second when Mark Payton launched a two run shot. From there, both teams scored respectively in each half inning from the bottom of the third through the top of the sixth. Norfolk scored in the third on an RBI double by Phillips. In the fourth, Nevin drew a bases loaded walk, followed by an RBI single by Diaz and then a sac fly by Phillips. The Tides hit back-to-back home runs in the fifth by Jordan Westburg and Ortiz to give them 12 runs. Charlotte combined for five runs in that same span, putting the Tides lead at 12-8.

Norfolk scored their final run in the bottom of the seventh when Diaz hit another RBI single. Charlotte attempted a comeback with three runs in the ninth but Nick Vespi came in to shut them down for his seventh save of the season as the Tides won, 13-11.

TIDES RECORD WATCH: With the Tides hitting foru home runs tonight, they have topped the franchise record for most home runs in a season (151, 1971), totaling 153…with the Tides breaking their base on balls and hit-by-pitches records this season, their .341 on-base percentage would break the record as an Orioles affiliate of .337 set in 2019…Norfolk’s pitching has beat the strikeout record of 1,195 set in 2019.

WE GOIN’ BACK-TO-BACK: The Tides’ four home runs came on two separate occasions of back-to-back home runs…in the first inning Yusnel Diaz and Brett Phillips did so and in the…