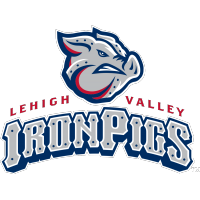 (Rochester, NY) – The Lehigh Valley IronPigs (72-65) dropped their third straight game against the Rochester Red Wings (62-76) as they lost 2-1 in 10 innings on Thursday evening. Nick Duron (4-7) threw a wild pitch in the bottom of the 10th inning that allowed Jecksson Flores to score the game-winning run.

The IronPigs got another quality start out of Michael Plassmeyer. He struck out six batters over five innings pitched and did not allow a run. He gave up just three hits and walked four batters. Griff McGarry tossed two scoreless innings in relief, issuing just one walk, and striking out three batters.

Johan Camargo gave Lehigh Valley a 1-0 lead in the top of the sixth inning as he hit a sacrifice fly against Francisco Perez. Dustin Peterson scored on the play for the IronPigs. John Nogowski tied the game at 1-1 for Rochester by hitting a home run against Jakob Hernandez in the bottom of the eighth inning. The home run for Nogowski was his fourth of the season.

Alberto Baldonado (3-2) earned the win for Rochester by pitching a scoreless top of the 10th inning. He issued one walk and struck out one batter. Lehigh Valley went 0-for-8 with runners in scoring position, leaving 10 runners on base.

The IronPigs and Red Wings play again on Friday evening at Frontier Field. First pitch is scheduled for 6:05 p.m.

The 2022 IronPigs season is presented by Capital BlueCross.