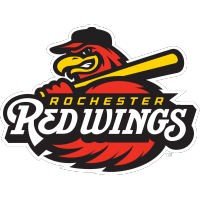 The Wings lost a 10-inning-heartbreaker in the first game of the series against the Bisons on Tuesday night at Sahlen Field, 3-2.

RHP Joan Adon (2-2) got the start on the bump for the Wings. He only allowed one earned run on two hits, struck out one, and walked three in his 5.0 innings of work. He gave way to LHP Alberto Baldonado in the sixth inning.

Buffalo broke the score first in the fourth inning with a sacrifice fly off the bat of 3B Rafeal Lantigua.

After a lead-off walk for CF Andrew Stevenson, the Wings tied the game at one apiece as 2B Jake Alu ripped an RBI single to right field.

Baldonado recorded 2.0 innings pitched, fanned two, and walked one in his outing. The Wings brought in RHP Connor Sadzeck in the eighth. He threw 1.1 innings, gave up one earned run on one hit, walked two, and struck out one.

LF Nick Banks gave the Wings a 2-1 lead in the top of the ninth inning with a solo blast to left center field. Banks now has an even 10 home runs on the year.

The Bisons tied the game again in the bottom of the ninth with a solo blast off the bat of 1B LJ Talley.

The Wings brought in RHP Juan Minaya who kept the game tied in the ninth. But after two intentional walks and a sac-bunt, he gave way to LHP Matt Cronin. Cronin walked one and gave up the walk-off knock; the earned run was charged to Minaya.

Stevenson swiped two bags tonight bringing his total to 35 this year. He is now in second place in the league in this category.

The last time the Wings were held to four hits through nine innings was 9/15 against the Lehigh Valley IronPigs.

The Wings look to even the series at one apiece on Wednesday night at 6:05 pm. They’ll hand the ball to LHP Mackenzie Gore in a Minor League Rehab Assignment.â