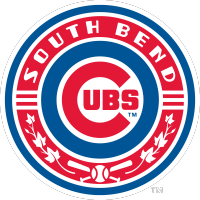 Eastlake, OH – With their backs against the wall after the Lake County Captains took Game 1 of the Midwest League Championship Series, the South Bend Cubs fought back to take Game 2 at Classic Park on Tuesday night by a final of 4-3. The Cubs tied the series at a game apiece, and South Bend can win their second championship in three seasons on Wednesday night as the clubs meet in a winner-take-all Game 3.

Tuesday’s Game 2 got started with the Captains getting on the board first for the first time in the series. The Cubs led 5-0 early in the first game, but Lake County took the first advantage against Luis Devers. Much like his start in the Division Series versus Cedar Rapids, after giving up an early run, Devers locked in.

The Cubs also got him some run support in the top of the 4th when Pablo Aliendo singled home Luis Verdugo to make it a 1-1 game. Devers displayed another terrific mix of his three pitches and struck out three batters in four innings.

Devers surrendered his second run in the bottom of the 4th when Micael Ramirez picked up an RBI by singling home Christian Cairo. The two runs were the most that Devers has given up in a South Bend uniform. He capped off a terrific summer with the Cubs and is potentially in line to win the Chicago Cubs Minor League Pitcher of the Year Award.

After a scoreless 5th inning pitched by Riley Martin, the Cubs had an answer and tied the game at 2-2 when Yohendrick Pinango stole second base, and the ball was thrown into center field by the Lake County catcher Ramirez. BJ Murray raced home, and the Cubs evened up the game.

An inning later in the 7th, Verdugo roped a singled into right field to plate Owen Caissie. Up a run, South Bend added a key insurance tally when Pete Crow-Armstrong crushed a ball deep over the right field wall for his first playoff home run. The Cubs led 4-2 going to the 9th inning.

As expected, Lake County did not go down quietly. Jake Reindl worked two shutout innings in the 7th and 8th, and the Cubs turned to Michael McAvene in the 9th.

McAvene battled around a walk and a single to grind through the final three outs. Joe Naranjo brought in a run on an RBI sac-fly, but McAvene got Connor Kokx to ground out and Petey Halpin to pop out to end the game. The Cubs celebrated and tied the series to set up the biggest game of 2022 on Wednesday night.

Game 3 will have the Cubs send righty Porter Hodge to the mound in Eastlake. It…