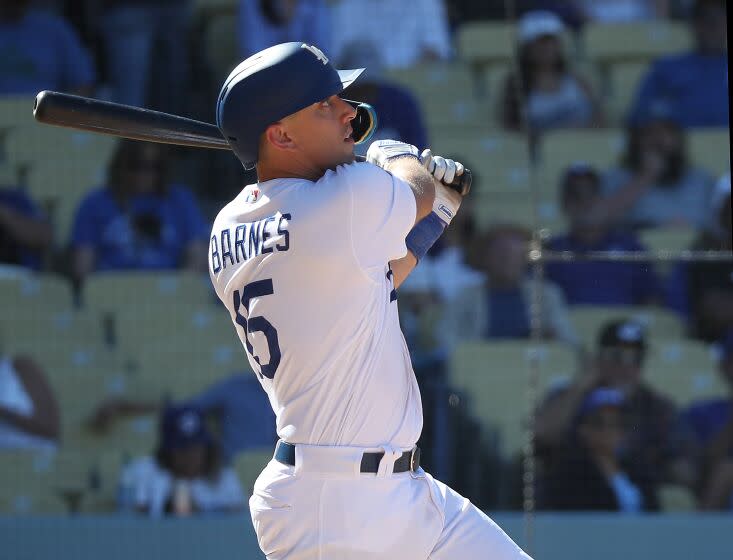 The Dodgers lurched through a doubleheader Tuesday of two oddly similar games with starkly different outcomes.

The opener took three-plus hours beginning at noon, and the Dodgers eventually progressed from flat to focused, exploding for five runs in the eighth inning to edge the Arizona Diamondbacks 6-5 at Dodger Stadium.

Another three-plus hours passed before the second game began, and again the Dodgers fell behind early, surrendering their third unearned run of the day in the second inning and two more in the sixth, giving them a season-high four errors in the game — and six in the doubleheader.

Max Muncy hit a two-run home run in the sixth but Ketel Marte answered with a solo shot in the seventh, keeping the Diamondbacks ahead by two runs. Muncy came up in eighth and scorched a line drive with two out and a runner on, but right fielder Jordan Luplow flagged it down. The Diamondbacks tacked on a run in the ninth to win 5-2.

“We didn’t play good baseball,” manager Dave Roberts said. “It’s hard to win when you give up outs and give up bases.”

Dodgers starter Tyler Anderson continued to make a case for inclusion in the postseason rotation, giving up three unearned runs and two hits through six innings while striking out five and lowering his ERA to 2.52.

“He’s had a good year,” Roberts said of Anderson, who is 15-4 and made the NL All-Star team. “Whatever his role is [in the postseason], he’s going to be important.”

Anderson, however, had to own a bases-loaded, no-out jam in the sixth. He hit a batter, dropped a throw covering first on a grounder to Freddie Freeman and hit another batter. Then the Dodgers defense, wobbly all day, got worse.