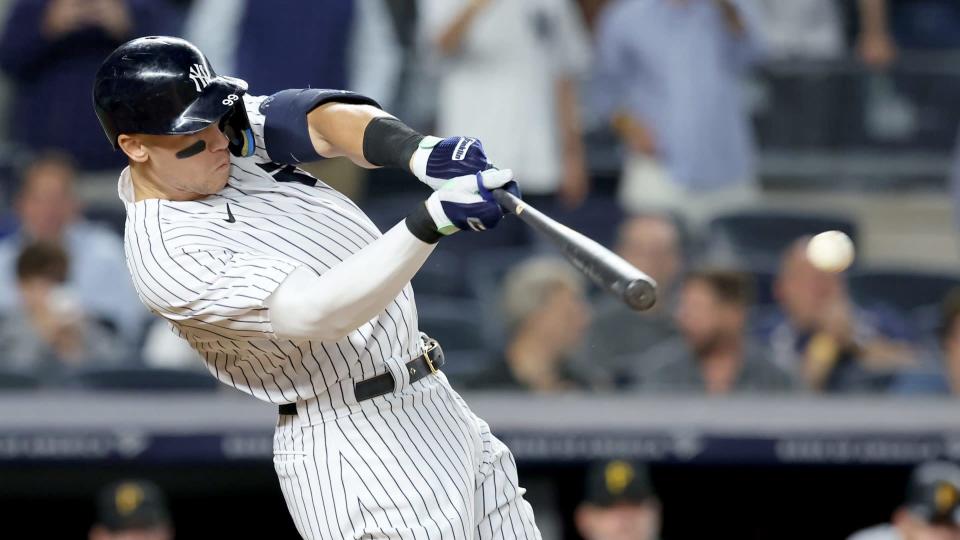 NEW YORK – Aaron Judge disappointed fans by staying stuck at 60 homers but doubled twice and scored on Oswaldo Cabrera‘s first-inning grand slam that started the New York Yankees to a 14-2 rout of the Pittsburgh Pirates on Wednesday night.

A day after hitting home run No. 60 to spark a stunning five-run, ninth-inning rally capped by Giancarlo Stanton‘s game-ending slam, Judge doubled on the first pitch to him in the first and fifth innings. Given another time up during an eight-run eighth inning, Judge walked on four pitches from rookie Eric Stout as the sellout crowd of 46,175 booed loudly.

Judge went 2 for 4 and with 14 games left and remained one home run shy of tying the American League record set by the Yankees’ Roger Maris in 1961. Judge leads the AL in average (.317), home runs and RBIs (128), in position to become the first Triple Crown winner in a decade.

Cabrera and Gleyber Torres had five RBIs each. Torres homered twice in the eighth inning, raising his season total to 23.

Applause started whenever Judge walked onto the on-deck circle, and fans stood and snapped photos. Maris’ sons and Judge’s family were in the stands.

He started the first against rookie Roasny Contreras (5-5) with a liner to left and began the fifth with a one-hopper over the left-field wall.

New York (90-58) closed in on its sixth straight postseason berth and 24th in 28 years. The Yankees began the night 5 1/2 games ahead of second-place Toronto in the AL East.

Cabrera made the Yankees the first team in major league history to end a game with a slam and hit another in the first inning of its next game, according to STATS. The only previous teams to hit slams in the last inning of a game and the first of the next were the 1955 Boston Red Sox and the 2017 Los Angeles Dodgers.

Cabrera has three homers and 14 RBIs in 30 games since his debut on Aug. 17. With the bases loaded on Judge’s double and a pair of walks by Contreras, Cabrera drove a hanging slider into the right-field bleachers.

New York has four slams in four games against the Pirates this season, including in consecutive innings on July 6. The Yankees’ 10 slams this season are their most since 2012.

Harrison Bader had a two-run double in the big eighth and has five RBIs in his first two games with the Yankees.

Luis Severino (6-3) returned from a strained right lat muscle that had sidelined him since July 13 and allowed one run and two hits in five innings with six strikeouts. He reached 98.9…