Why Nick Martinez’s Opt-Out Decision is a Close Call 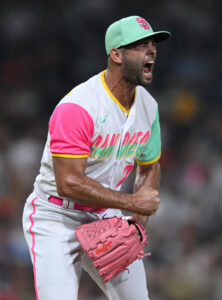 When the 2021-22 offseason commenced, Nick Martinez wasn’t even on the radar for most MLB fans. The right-hander had stumbled through an uninspiring four-year run with the Rangers from 2014-17, and while a big showing in Japan put him back on the radar of MLB clubs, it was still a shock to see him sign the 14th-largest contract of any pitcher last offseason. Martinez not only secured an eye-opening four-year term and $25.5MM guarantee from the Padres — he was also promised the opportunity to opt out of his contract after each season of the deal.

It’s an upside-laden contract for the player. Annual opt-outs of that nature tend to go to coveted free agents settling for shorter-term deals than they might otherwise prefer (e.g. Carlos Correa in Minnesota). It’s not an entirely new concept — Scott Kazmir got that treatment from the Dodgers as far back as 2015 when signing his three-year, $48MM deal — and it’s one that Padres president of baseball ops has now used to lure in a pair of players he played a role in signing and developing during his time with Texas; Jurickson Profar’s three-year, $21MM contract also contained an opt-out after each of the first two seasons.

Martinez’s four-year deal pays him a $2MM signing bonus and a $4MM salary in 2022. All three of his player options are valued at $6.5MM, and he’d receive a $1.5MM buyout if he decided to turn an option down and test free agency. In other words, Martinez’s upcoming option effectively is a net $18MM decision. The signing bonus, 2022 salary and option buyout are all but banked. The question for him is one of whether he can top $18MM in free agency this winter.

It’s fair to question whether that can be called a given. On the surface, Martinez’s 3.22 ERA in 100 1/3 innings has to be considered a roaring success. He entered the 2022 season with a career 4.77 ERA in 415 1/3 innings, all coming in that prior run with the Rangers — one that concluded with consecutive ERAs north of 5.50.

At the same time, Martinez hasn’t exactly dominated opponents. His 20.9% strikeout rate is below the 22.3% league average, while his 8.6% walk rate is ever so slightly higher than the 8.2% league average. Martinez induces grounders at an above-average clip (46.7% compared to 42.2%) but also surrenders home runs more frequently than the average pitcher (1.25 HR/9 compared to 1.10 HR/9).

The role — or rather, the roles — that Martinez has filled this year don’t necessarily help his…