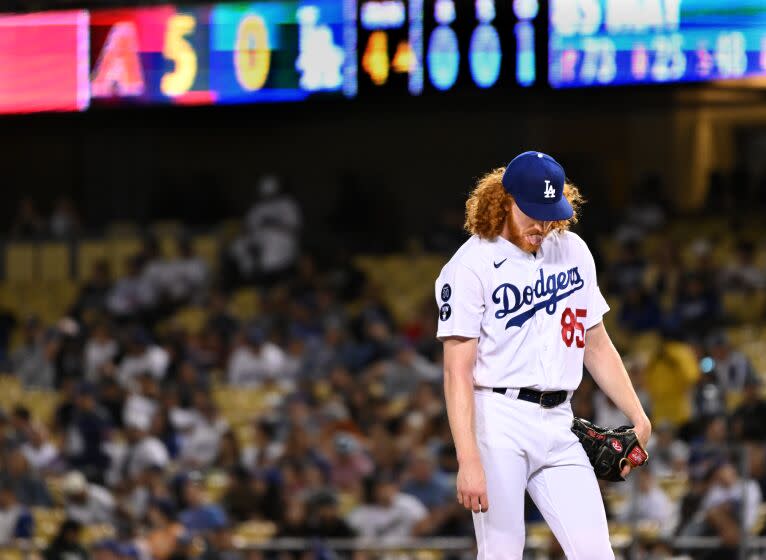 Dustin May had no problem getting the first two strikes against Arizona Diamondbacks hitters Wednesday night.

Putting them away, however, became a nightmarish adventure for the Dodgers right-hander still trying to rediscover his way in a return from Tommy John surgery.

In a 6-1 loss at Dodger Stadium, May followed up his best start of the season with one of his worst, giving up five runs over four shaky innings in which he also walked two batters, hit one and had seven men reach base from a two-strike count.

“I set myself up for failure, walking guys and giving up contact,” May said. “It was just overall bad.”

Before Wednesday, it appeared May was moving closer to a starting spot in the Dodgers’ playoff rotation, thanks to an uptick in performance, including five no-hit innings against the San Francisco Giants last week, and because starting games could be easier on his surgically repaired elbow.

“Being a young pitcher, [coming off] Tommy John, first year back, to kind of give him as much opportunity to have success preparation-wise, routine-wise, obviously that makes the most sense,” manager Dave Roberts said pregame. “Is it cemented? I’d probably stop short of that. But that’s most plausible.”

To be counted on in the playoffs, however, the 25-year-old will have to avoid outings like Wednesday’s.

In the first inning, May had leadoff hitter Daulton Varsho in a 2-and-2 count before walking him on a low curveball and high sinker.

With two outs, and Varsho at second after a stolen base, May had Christian Walker in a 1-and-2 hole, only to throw a wide fastball and a low curve that left the count full. He then threw an elevated sinker Walker dumped into left for a broken-bat RBI single.

A similar sequence played out in the third inning. Jake McCarthy was in a 1-and-2 count with two outs, but then laid off a couple of curveballs and a cutter to draw a walk. Moments later, he stole second, then scored on an RBI single by Walker.

In the fourth inning, May’s night snowballed out of control.

After Carson Kelly doubled, Geraldo Perdomo singled on an 0-and-2 fastball and Varsho was hit by an 0-and-2 curveball to load the bases.

May tried to start the next batter, Corbin Carroll, with an elevated cutter but missed his spot low and over the plate. Carroll smoked it,…