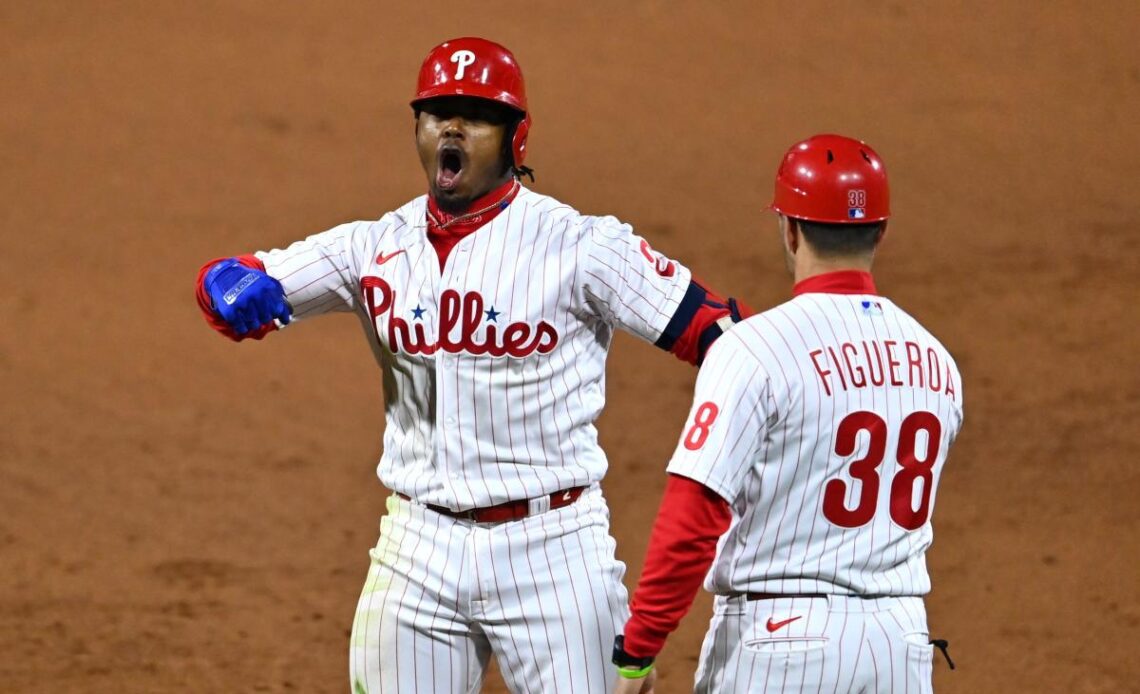 PHILADELPHIA – Finally, after 4,388 days, having nothing but memories watching old highlight reels the past 12 years, this year’s edition of the Philadelphia Phillies got to experience that feeling for themselves.

The Phillies, for the first since Oct. 17, 2010, won their first National League championship game in their own home ballpark, winning 4-2 over the San Diego Padres, and taking a 2 games to 1 lead in this best-of-seven series.

Really, the Phillies will tell you, it has felt just about that long since they last slept in their own bed.

The Phillies, who have been on the road for 21 of their last 26 nights, treated their zealous sellout crowd of 45,279 to one of their typical victories.

Plenty of power. Lots of bad defense. Timely hits. Big plays. High drama. And holding on for dear life in the ninth inning.

And, oh, man, did it ever feel good for these road warriors, who are now two victories away from their first World Series since 2009.

“Twenty straight days on the road and just home for what felt like a blink and right back on the road,’’ Phillies first baseman Rhys Hoskins said, “we have to spend time with each other. But that’s a good thing.

ALL-STARS: Linked by free-agent frenzy of 2019, Harper and Machado meet in playoffs

STEP UP TO THE PLATE: Sign up now to get top sports headlines delivered daily

If the crowd wasn’t pumped up enough before the game, it took just one swing of the bat by slugger Kyle Schwarber to set them into delirium.

Schwarber, who hit more home runs than any player in baseball but AL record-setting Aaron Judge’s 62 homers this year, smacked Joe Musgrove’s 91-mph cutter into the right-field seats. It was Schwarber’s eighth leadoff home run of the season, after hitting 46 during the regular season.

Schwarber has fit in like Rocky Balboa since his free-agent arrival this year with his blue-collar work ethic, perseverance, and no-nonsense approach to the game. He plays to win, and anything less is unacceptable.

There’s a reason why his teams have been in the postseason in seven of the past eight years. Five years and a World Series title with the Chicago Cubs, last year with the Boston Red Sox and now with the Phillies. He even reached the College World Series with Indiana University.

“I don’t think that’s an accident,’’ Phillies catcher J.T. Realmuto says. “He’s done it in a lot of different places, and when that usually happens, that…