Dodgers’ Clayton Kershaw finally has learned it’s OK to be normal, even on game days 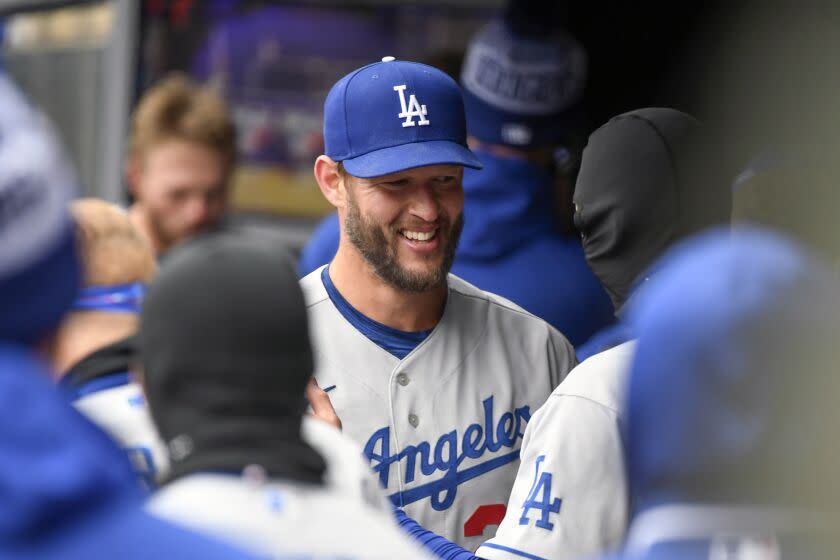 Clayton Kershaw made an important discovery this year as he reclaimed his place as one of the best pitchers in baseball: When he wasn’t on the mound, he could be a normal person, even on days he pitched.

Suddenly, Kershaw was smiling before his starts. He was talking more to his catchers. He was sharing laughs with them on the bench.

“I think you do enjoy it a little bit more,” Kershaw said in September.

This is the version of Kershaw who will return to the Dodgers next season, not the one who was notoriously unapproachable when he pitched. In the coming days, Kershaw is expected to finalize a new one-year deal with the team, according to multiple people familiar with knowledge of the situation.

“In years past, you couldn’t have a conversation with him before, during and even after [his starts],” manager Dave Roberts said last month. “It was just a tough conversation. I think that now he is kind of open to things and realizes that you can still somewhat be normal and still be very good.

“It’s been fun for me to see him evolve.”

Kershaw will be 35 on opening day. The upcoming season will be his 16th with the Dodgers, his newfound tranquility a projection of his experience.

The change in game-day demeanor, however, shouldn’t be interpreted as a sign that Kershaw is any less competitive than he was at, say, 25 or 30.

“I don’t want to be considered a nice guy,” Kershaw said with a chuckle in that September conversation.

Kershaw was only half-kidding.

“I think there is that edge that you have to have,” he said. “I think there’s like that, ‘I’m better than you, I’m going to outcompete you, I’m still going to do this.’ I think when you lose that edge, that’s when you become, ‘Ah, whatever happens out there happens.’ I don’t ever want to do that. I’m going to retire before I do that.”

The proof was in his performance, Kershaw posting a 12-3 record and 2.28 earned-run average in 22 starts.

But, he said, “I think it’s OK to have a level of normalcy within your competitiveness.”

Early in his career, Kershaw couldn’t always turn off the competitive switch when the game was over, which occasionally resulted in tense interactions with the media. In recent years, he gradually became more relaxed in postgame interviews.