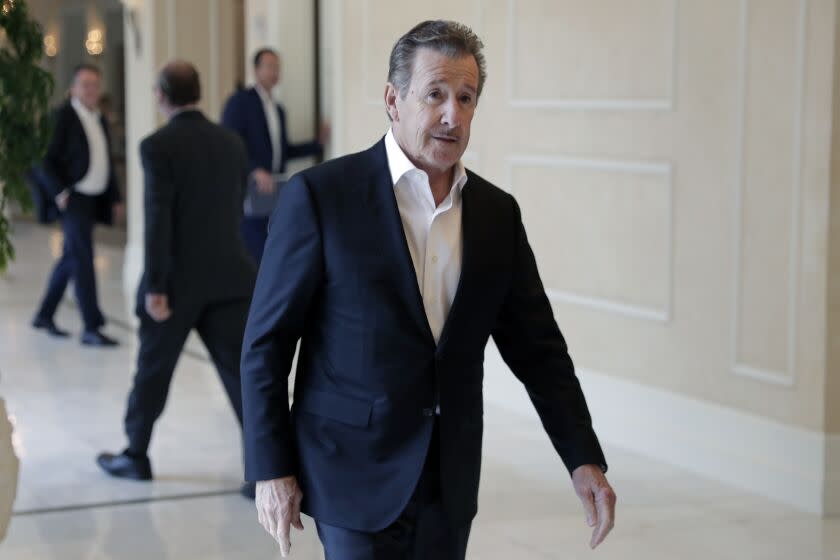 Even with Angels owner Arte Moreno in the midst of selling the Angels, the city of Anaheim might throw a nine-figure curveball at him.

On Tuesday, the Anaheim City Council is scheduled to consider whether to approve a study that could show Angel Stadium needs hundreds of millions of dollars of upgrades. The meeting agenda, posted Thursday night, said the study would be commissioned “in anticipation of potential litigation” that at least one councilman believes could force the team to pick up the tab.

In 2013, a city report estimated the stadium would need between $130 million and $150 million for maintenance, repairs and renovations over the ensuing 20 years. That estimated amount is “easily double” now, city spokesman Mike Lyster told the Orange County Register in August, but the proposed study would provide a detailed assessment.

The Angels’ lease at the city-owned stadium requires the team to pay the “sole expense” of ballpark maintenance and upkeep, aside from a specified city contribution each year. According to the city, the Angels have made $54.5 million in capital repairs and improvements since 2002, including the $12.3 million in city contributions. Moreno bought the team in 2003.

The lease specifies that the Angels must maintain their stadium “at least equal to first class professional baseball stadiums, such as, on the date hereof, Kansas City and Dodger stadiums.” The lease was signed in 1996, and the $117-million renovation of Angel Stadium was completed in 1998.

Since then, the Kansas City Royals’ stadium has received a $250-million upgrade courtesy of local taxpayers, and the Dodgers’ owners have invested $350 million into renovations at Dodger Stadium.

Councilman Jose Moreno, no relation to the Angels’ owner, said at an Oct. 25 meeting that the city “should look” to enforce the lease as necessary. City attorney Robert Fabela, speaking generally, said such enforcement could include asking a court to order compliance with a lease and award a payment for damages.

It is unclear whether a court could interpret “on the date hereof” to mean Angel Stadium needed to be maintained on par with the condition of the Royals’ stadium and Dodger Stadium on that date, or whether a court would simply consider those two ballparks as examples of contemporary first-class stadiums.

A clause in the same…