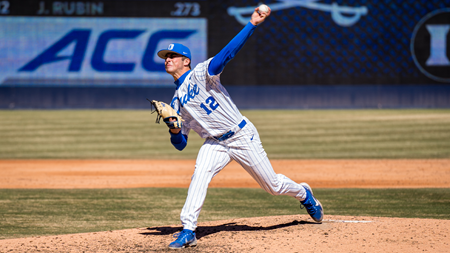 The Leominster, Mass. native appeared in 20 games for the Blue Devils on the mound in 2022, recording a 4.17 ERA and striking out 58 batters. Santucci held opposing batters to a .211 average and started seven games on the mound. On May 1, the lefty fanned 10 High Point batters en route to his second victory of the season.

Santucci is an impressive two-way player for the Blue Devils with a real shot to stick on the mound or in the outfield. Most scouts, however, like him on the mound. The fastball features good riding shape up to 95, sitting 91-93 later in outings. His slider shows good depth and can be tough for hitters to read off his fastball with late, deep break. The changeup is also promising with fading action away from righty bats, though he’s still ironing out feel for the pitch. That said, Santucci has a conviction and willingness to throw the pitch whenever he wants. There’s a fringier curveball in there too, but for now he’s primarily a three-pitch lefty with more projection ahead of him and a track record of pitching big innings in the ACC.