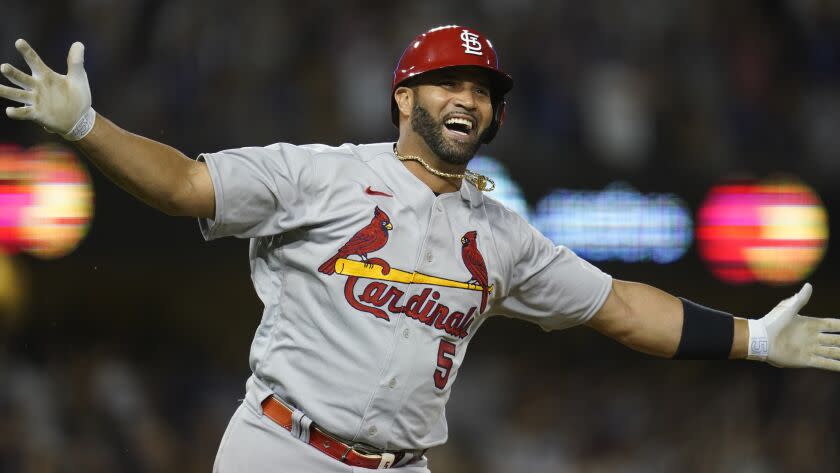 Albert Pujols will work with young players at the Angels’ academy in the Dominican Republic and tutor big leaguers and minor leaguers during spring training in Arizona as part of the retired slugger’s 10-year, $10-million personal-services contract with the team, club president John Carpino said.

“He’ll be like a team ambassador,” Carpino said Monday at the Pelican Hill Golf Club in Newport Beach, which hosted a celebrity tournament to benefit the MLB Youth Academy in Compton. “We’re real excited about the possibilities moving forward. He’s Albert Pujols. It’s an asset. He has a ton of baseball knowledge.”

The personal-services contract is linked to the 10-year, $240-million deal that Pujols, 42, signed with the Angels before 2012 and that Pujols plans to honor despite owner Arte Moreno’s intentions of selling the team and the disappointing end to the first baseman’s nine-plus-year tenure in Anaheim.

The personal-services deal essentially gives the Angels exclusive rights to Pujols during the first 10 years of his retirement. When asked if it would preclude Pujols from doing similar work for the St. Louis Cardinals, the team Pujols starred with for 11 years before signing with the Angels, Carpino said, “Possibly.”

Do the Angels intend to block Pujols from working with Cardinals players and making appearances on behalf of the team?

“I don’t know,” Carpino said. “It’s something we can probably work out with him and the Cardinals.”

Pujols was among several former Angels — including outfielders Torii Hunter and Gary Matthews Jr., manager Mike Scioscia and coaches Mickey Hatcher and Ron Roenicke — who participated in Monday’s golf event. He declined an interview request before teeing off and was not available afterward.

Carpino said he spoke with Pujols about the personal-services contract a few months ago and that both parties agreed to move forward with the arrangement.

Asked if Pujols has expressed a desire to maintain his strong ties to the Cardinals, whose cap is expected to adorn Pujols’ Hall-of-Fame plaque, Carpino…