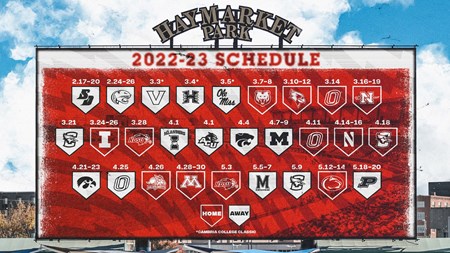 
Head coach Will Bolt announced the 2023 baseball schedule Monday, which features 27 home games at Hawks Field at Haymarket Park for the Huskers.

“We have a challenging schedule that will give our student-athletes the opportunity to compete against some of the top teams in college baseball,” said Bolt. “The Big Ten continues to improve every year and our schedule leading up to conference play will help us get ready to compete in our league. I’m excited for our home slate and look forward to playing in front of our great fans at Hawks Field next spring.”

The schedule includes five 2022 NCAA Tournament participants, including defending national champion Ole Miss. The Huskers take on the reigning national champion in regular-season action for the third time in the last 18 seasons after facing Oregon State in 2019 and Texas in 2006.

The Huskers open their 55-game slate in the Golden State for the first time since 2019, as the Huskers begin their season with a four-game series at San Diego (Feb. 17-20). The following weekend, Nebraska treks to Mobile, Ala., for a three-game set at South Alabama (Feb. 24-26).

NU continues its season-opening road trip, as the Huskers are set to compete in the Cambria College Classic at U.S. Bank Stadium in Minneapolis. The Big Red open with Vanderbilt (March 3) before battling Hawaii (March 4) and Ole Miss (March 5).

Nebraska gets an early jump on its home slate and plays 14 of its next 15 games at Hawks Field in the month of March. The Huskers open the home schedule with a 10-game homestand that includes games against Northern Colorado (March 7-8), Illinois State (March 10-12), Omaha (March 14) and Nicholls (March 16-19).

After a trip down I-80 to visit Creighton at Charles Schwab Field (March 21), the Huskers start Big Ten play with a home series with Illinois (March 24-26) before welcoming North Dakota State for a midweek game (March 28).

The Huskers make the trip to Abilene, Texas, for a Saturday doubleheader against Texas A&M-Corpus Christi and Abilene Christian (April 1), and a midweek matchup at Kansas State (April 4) rounds out the…