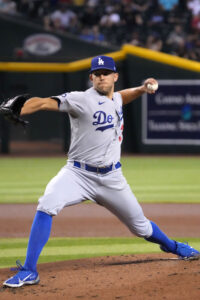 Nov. 16: The Angels have formally announced a three-year deal with Anderson. He’ll be paid an even $13MM annually, tweets Jeff Fletcher of the Orange County Register.

3:02pm: The Angels are in agreement on a contract with free-agent lefty Tyler Anderson, Jon Heyman of the New York Post reports (Twitter link). Anderson had received a one-year, $19.65MM qualifying offer, but his deal with the Halos means he’s turning that down for a more lucrative pact. Anderson’s contract is a three-year deal worth roughly $40MM, Joel Sherman of the New York Post adds. Anderson is represented by the Beverly Hills Sports Council.

A former first-round pick of the Rockies (No. 20 overall, in 2011), Anderson showed promise as a rookie in 2016 (3.54 ERA in 114 1/3 innings) before beginning to struggle at Coors Field and eventually incurring a fairly serious knee injury that derailed some of his prime years. Anderson was diagnosed with a chondral defect in the cartilage of his left knee, which sidelined him for the better part of a year and led to the end of his tenure with the Rockies.

Since leaving Colorado, Anderson’s climb back to big league relevance has been impressive, to say the least. Signed to a one-year, make-good deal by the Giants heading into 2020, Anderson did just that in the Covid-shortened season. A 4.37 ERA in 11 starts/13 total appearances wasn’t exactly eye-popping, but it earned him another big league deal with the Pirates the following season. Both the Phillies and Mariners went hard after Anderson at the ’21 trade deadline, with the lefty ultimately landing in Seattle. His 31 starts of roughly league-average pitching netted him a late one-year deal with the Dodgers.

As they so frequently do, the Dodgers found a way to coax a new level of performance out of Anderson in 2022. Anderson didn’t overhaul his pitch repertoire but did rely more heavily on his changeup than he has in all but the shortened 2020 season. R.J. Anderson of CBS Sports points out that Anderson also abandoned a changeup grip he’d been using in recent years and went back to an old grip that wound up generating more drop and limiting…